Mandela – the Legacy of Freedom: an exclusive interview with South Africa's Ambassador to Ukraine 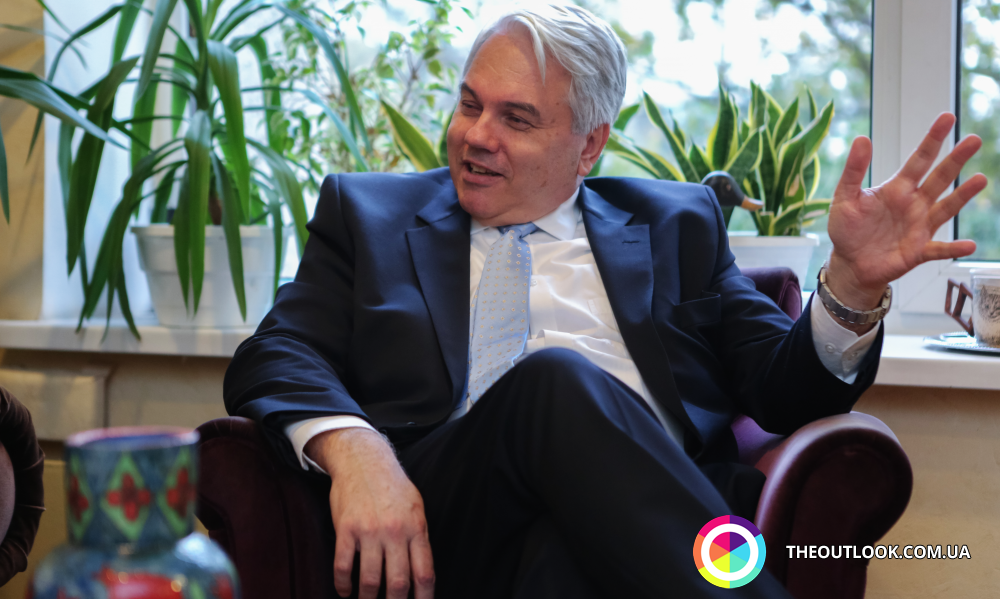 On 23 October, in Kiev in the Dome Master Class of Education and Culture opens both a festival and exhibition dedicated to the 100th birth anniversary of Nelson Mandela. Thus our chief editor Darya Karyakina interviewed the Extraordinary and Plenipotentiary Ambassador of the Republic of South Africa in Ukraine Christian Albertus Basson, who told us about this outstanding person whom he met personally.

– So, let’s start. I would like to ask you about the today’s event. Actually, I think that we did the first exhibition of such kind in Ukraine, so please present a little bit for Ukrainians and tell us some words about this occasion.

– Thank you very much. This year is celebrated the twentieth anniversary of birth of the new South Africa, twenty years of democracy. The President Mandela, as you know, played a very big role in the birth of the modern South Africa – he was the first democratically elected President, in 1994 he was elected already at advanced age. Mandela passed away in December last year, we still fell his presence. Our first exhibition and our first film festival are devoted to those twenty years of democracy and life of the President Mandela that we want to share with everyone. We did it globally this year, not only in Ukraine, but also in other countries. We are very fortunate to have content from the producers of very good films with star actors and top producers for this event. So, we are very glad to host over four or five weeks films about the South Africa. – I’d like to ask you personally what do you think are the most important achievements of Nelson Mandela for your country?

– To my mind, he obviously achieved a lot. I believe that the first one is reconciliation. We are diverse country: we are from different histories, backgrounds and cultures, and Mandela was able to forge a new nation around the Constitution. Moreover, through his personal contact he was able to bridge the different forces: extreme right wing, left wing and all political groups. He made them all feel a part of the process, to my mind, this is his the most lasting legacy. The second one was his respect for Law, the rule of Law. He was trained as a lawyer, and we are very fortunate that our three founding fathers Oliver Tambo, Walter Sisulu and the President Mandela were all lawyers and had a great respect for Law. For them the African democratic Constitution that captures the aspirations of the South Africa and human rights respect, was very important. I think the third element for him was that he was a success to take the South Africa back to international community. As you may remember, we were crossed out from the most of international events until Mandela became the President. He took us back to international community. Thus, he contributed much into reconciliation and peace through negotiations. You know he did not like war, he did not like violence. He made a great contribution into humankind. He was a very great man of humanity. I met him a few times.

– Oh yes, I can tell you some interesting stories about him.

– Please tell, it is very interesting to speak to person who made an acquaintance with such a great figure.

– I am going to share my personal experience. When I was working in our international relations department, I had to go and brief him a few times in his office. He remembered names and he remembered faces. Once there was a very interesting occasion. As you know, Mandela spent twenty-seven years in prison and therefore he had serious problems with his legs. One day I was asked to take documents to him and to brief him in his residence. I arrived, there were no security guards, the only one who was there was his butler who opened a door for me. I said to him “I want to see the President Mandela to give him documents and to brief him”, he answered “Go up to his room”, but I said “I cannot go to his room, you know?” he told me “Don’t worry, he doesn’t mind.”. When I walked up the stairs, on the left-hand side, he was lying on the bed and a physiotherapist was massaging his legs. I was very conscious when they saw me walking in. And Mandela said “Young man, come here. Come and see your president lying on his bed”. How many people would do it? – He was open, great, you know, humanitarian. He loved people, he had a great love for people.

– Incredible scene, really. I think for our leaders it would be an interesting story. Actually my last question is: in what way can the Ukrainians learn more about the figure of Nelson Mandela? Maybe you can recommend some places to visit in your country, if they have such possibility, to read some books.

– We are always very eager to prescribe other countries our experience, so let me be frank about it. There are some general lessons that one can learn from the South Africa. First, you have to talk to everybody, whether you agree with them or not, you shall talk even to those people you do not agree with. And your President is doing that. Secondly, it is important to have good Constitution. The third aspect is the importance of the rule of Law and of the judicial system. The fourth aspect is that Mandela opened the economy for everybody to participate in it. Therefore, these are lessons that you can learn from the South African experience. We are not perfect, we are still dealing with the challenges from the past, but Mandela was very good in setting up an example for the future. Now when people talk, Mandela is always a reference point. They say “Mandela would have done this… This is that he would have said or done… ”. Thus, he has really become a benchmark. A very good example: he was summoned, while he was the President, to court to testify and he went to court, and many people said to him that presidents do not go to court, but for him it was important to set an example for the future that nobody is above the Law. So, there are many lessons that you can learn from Mandela’s life. And you will see them tonight and in some of movies within next few days. And also he had a great sense of occasion, how to use symbolism. One movie that shows this is Invictus. It is a fantastic movie about rugby. Or rather, the movie is about how to use the rugby cup to unify the nation. This is really something to see.

– Thank you, thank you very much.

– My pleasure. Thank you so much, thanks.