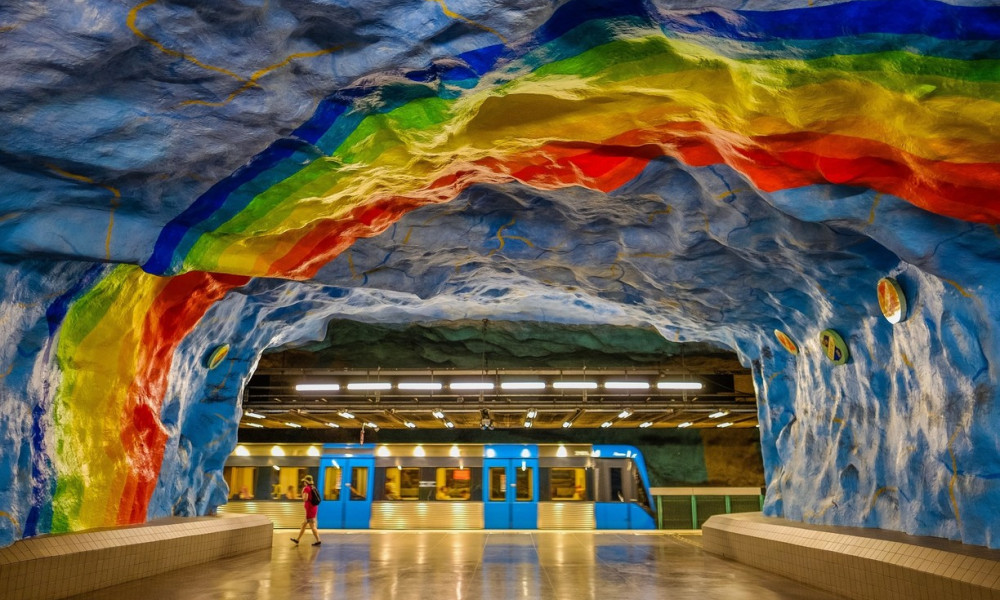 Residents of big cities almost daily use the subway as a transport means. Alas, in the rapid pace of modern life a few people can afford to enjoy the design of these transit hubs. OUTLOOK is not able to stop time, but allow us to highlight fifteen of the most mesmerizing underground subway station from all around the world.

You have to contemplate carefully as you never know if suddenly among our favourites you will came across points of your daily route usually blurred in fuss. We encourage you to imagine that we, not in a hurry, are going along an incredible line that connects the continents, and get out of the train to enjoy only the best of best stations. If the proposal is accepted, we will start with the subway in Frankfurt, Germany.

Do not worry that you will miss the Bockenheimer Warte Station - it is seen from afar. The unusual design of the station entrance was invented by architect Zbigniew Peter Pininski inspired by the work of surrealist artist Rene Magritte. This design is the best to convey the essence of subways - they literally "dig their teeth" into the life of the big cities. Let your imagination drive you further: we came into the subway in Germany, and then arrived at the Italian Naples. Toledo Station impresses with its concept - passengers feel as if they immersed in the water, or vice versa - floating up rising to the surface. Leaving the Apennines, we reach Munich very quickly and step on the mirror Münchner Freiheit Station, which provokes a sense of duality. We go further and stop at the German capital - Berlin, a home to Heidelberger Platz station, which is one of the most grandiose in the world. From there, it is a very close ride to the Prague. Staroměstské Station recalls either some overdesigned bathroom with futuristic tiling, or a bank vault with cells. It was built back in 1970, but it still looks very stylish. The next stop is Warsaw, where millions of people choose the majestic Wilson Platz Station in order to get to the right destination. This excellent example of impressive architecture was opened at the end of 2006. We move from Poland to Ukraine and exit at the Kiev Station of Zolotye Vorota (Golden Gate). The stationdeserves a place in the European metro hall of fame for being decorated with distinctive mosaic stylized to one from the days of Kievan Rus. Tourists visited the "mother of Russian cities", say this station feels not the subway but the temple. The next destination is Stockholm Metro, which has been built with style in mind and looks very incredible. More than 140 artists worked over its design, so it is not surprising that exhibitions of contemporary art are often held there. A distinctive feature is its interior, "as if trains are moving through the earth's rocks." Stadion Station, T-Centralen Station and Solna Station stand out as excellent examples of the beautiful architecture and interiors.

We finish our tour in South-East Asia, featuring almost no monumental buildings of the last century, instead modern technology is used everywhere. Let’s take, for instance, Taiwanese Formosa Boulevard Station. After walking through this Dome of Light techno centre, the mood certainly goes up.Photo trover.com

Well, you are sure to feel perfect when visiting the Shanghai Metro. After careful inspection of the sterile and minimalistic Longyang Road Station, we will take the train and go to the magical music through a colourful tunnel under the Huang Pu River toward bright fantasies!