Street art: From the French revolutionaries to Banksy 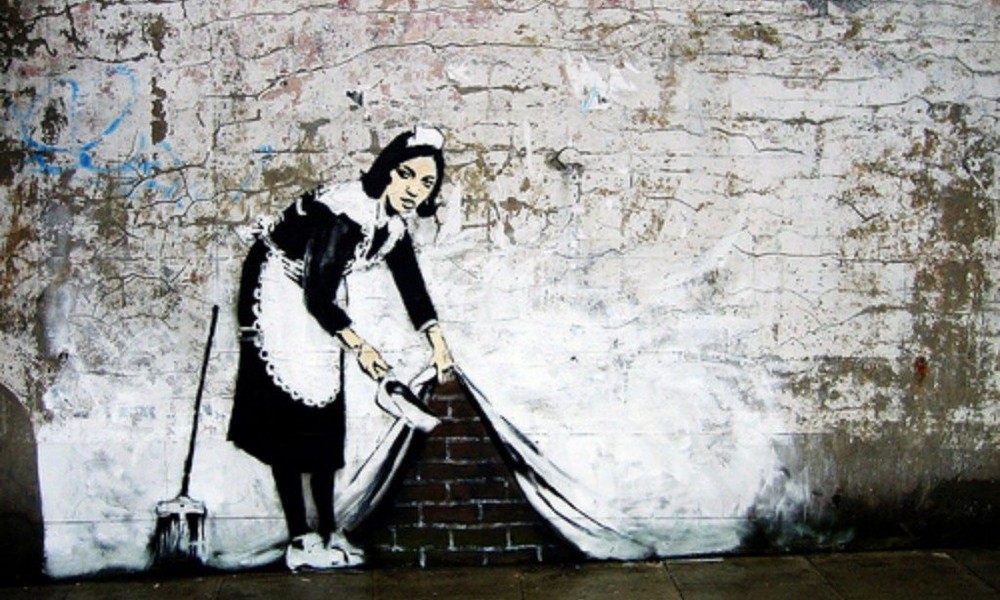 Nowadays the word "art" is sparkling and strikes the eye wherever you cast a look. Alas, if applied to ordinary canteen with dirty tables and flies, the place will not become a pleasant public catering with creative design. Yet, when it comes to genuine art, one should call things by their names, so we immerse into concrete jungle of mega-cities to enjoy one of the areas of street-art known as stencil art.

Original inscriptions, prints, political slogans and caricatures stencilled within a couple of minutes often look more impressive and large-scale than multi-coloured graffiti over which street artist has to work more than one night. Stencils are not considered as a kind of graffiti since the main difference is the use of stencil patterns. Therefore, some street artists feel as if adherents of patterns goof off creating works not entirely "by hand", and having the opportunity to escape, and thus not to be accused of "vandalism".

One can agree with this statement, but on the other hand, in order to make the unique stencil, artist has to break a sweat cutting the future masterpiece in the plastic or cardboard. As for the desire to be elusive, here stencil practitioners inherit the tradition of those who actually came up with this kind of art - the French revolutionaries, they used municipal walls for the recitation of their ideas. This was during the civil unrest of the 1870s. Then, by the way, it was the most popular to depict a guillotine, maybe because it threatened to rebel artists...

Very quickly, one of the cheapest types of propaganda captured the whole of Europe, and in the 20th century it spread worldwide. Generally, today most of these paintings are coined to remind those in powers and the public about topical issues. Although from time to time they are exhibited in halls of contemporary art and sometimes sold for millions, such as masterpieces by British artist Banksy or his French colleague Blek le Rat. The latter, by the way, calls himself a "true descendant" of past revolutionaries, working illegally before police caught him. To avoid penalties, Blek agreed to work in the galleries only, and with it began to earn good living.

However, more often the authors refuse official recognition, preferring city walls to any museums and exhibitions. As they say, each acts after his kind. For instance, a Paris based artist Le Bateleur decorated the walls of French capital with witty stencils during 80s and 90s of the last century. He refused to go to any contact, was wandering through squats and usually painted in rush-hours, when the streets of a huge city are crowded with people and it is easy to disappear in the crowd. Le Bateleur died almost twenty years ago in absolute poverty at the age of thirty, however, the people of Paris still remember him and appreciated his preserved works.Photo urbacolors.com

Here are 5 facts about stencil art:

One of the most recognizable stencils in the world was created in Leningrad during the Second World War. The inscription "Citizens! During an artillery bombardment, this side of the street is most dangerous!" appeared on the Nevskii Prospect, thanks to the efforts of Tatiana Kotova and Liubov Gerasimova and saved many lives.


The girl who worked in 1980 in Paris under the pseudonym Miss Tic got famous for the fact that instead of political slogans she stencilled poetry. Thus, the wall of blocks turned into pages of literature works, poet used to say that she did not need publishers.

Banksy's stencilled image of two policemen kissing can be seen in the movie Children of Men by Alfonso Cuaron.

Experienced stenciller believe that the most convenient and hidden from prying eyes container to transport their stencils is a box for sweets.

American Jérôme Mesnager holds the record for speed imaging. On average, one picture takes him 26 seconds.