Youtube
Статьи  >  Know  >  The competitions on hockey and street of Francophonie. The ambassador told journalists about the month of Canada to Ukraine

The competitions on hockey and street of Francophonie. The ambassador told journalists about the month of Canada to Ukraine 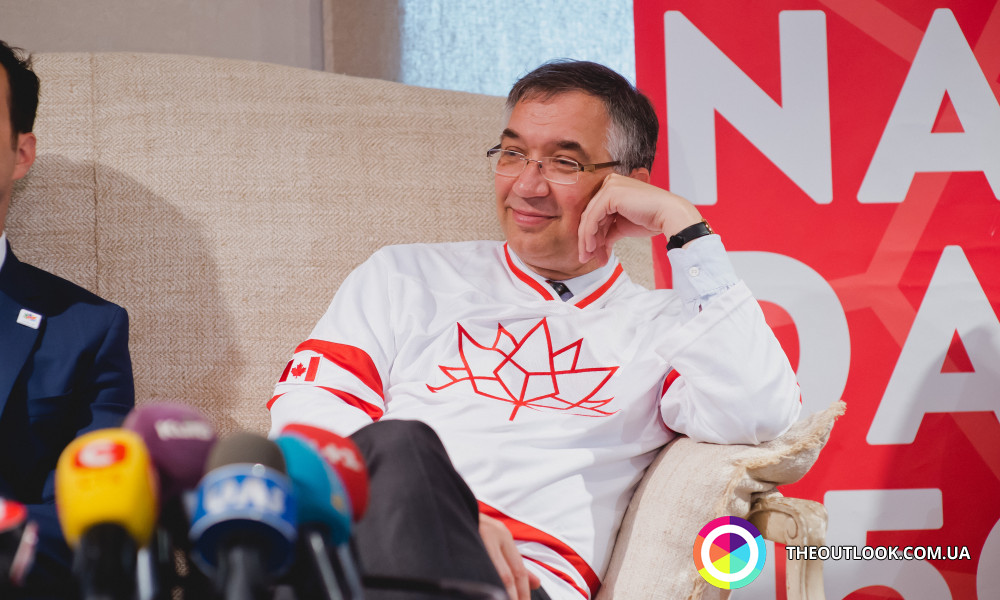 Why not to find out which Canadian goods and products are sold in Ukraine and where they could be bought? The citizens of Kiev and guests of the capital will soon be able to taste traditional Canadian cuisine, try delicacies with maple syrup, observe and participate in the game on street hockey, and see Canadian horse policeman.

In the course of celebration of 150-th anniversary of Canada with the participation of the embassy in the city there will be a range of entertaining and educatory events. The Day of Canada is the most important national holiday established in honor of union of all Northern American colonies of Britain in the only dominion. The event crucially important for the country happened basing of the Act of British North America that came into effort on the 1-st of July 1867. This day the first colonies of British North America, provinces Ontario, Quebec, New Scotland, and New Brunswick, being united in the confederation under the name Dominion Canada began the existence of the new country.

The meeting with mass media was started by the greeting speech of Ambassador Roman Vaschuk. The diplomat told the guests about the planned events and invited everybody to join the celebration of the important date.

‘We are going to stay open for people so as to popularize the topic of 150-th anniversary of Canada. For that we have prepared the range of interesting projects, particularly, photo-exhibition about the role of our country in the giving of shelters for the refugees, tournament on the street hockey at Khreschatik, presentation of Canadian good, Francophonie Day at one of the streets of the capital. We will be please to see everybody who wants it at our events!’, remarked Mr Ambassador.

Furthermore, Mr Ambassador turned the floor to his colleagues. Karim Morkos is the Head of department of international development talked in details about the preparation to the celebration:

‘As we are preparing for 150-th anniversary we try to involve the local communities to the organization and make an accent at the variety and inclusiveness of Canada. For instance, this year our partners became Ukrainian team of Games of Unconquered (it is the series of international games in Paralympics style. At the competitions created by Prince Harry the injured military soldiers and veterans in such kinds of sports as basketball at wheelchair, sitting volleyball and rowing in a hall). This year such an event is going to happen in Canada, and yesterday the final countdown started, particularly, 100 day till official opening. In the course of Atlas Weekend one of our bands is coming. Our famous goalkeepers will participate in the competitions on the street hockey which is about to go at Khreschatik… Apart from that we have involved Canadian community in Ukraine to celebration…’

‘For us and our team it is a great honor to be partner of such important events. Once again it emphasizes the firm collaboration and friendship between our countries. The community of Ukraine is the largest in Canada and we are please to arrive at the competitions verily in this state. Also our people are going to participate in the game on hockey at Khreschatik, and it will be the first attempt in this game, as in the same day we will represent our main team’, added Oxana Gorbach, the Coordinator of the project Games of Unconquered in Ukraine.

Commercial and political advisor Ross Demkiv told journalists about the organization of games of street hockey at Khreschatik.

‘I would like to say that hockey was invented in Canada when the country was only eight. It is symbolically that the day of such traditional kind of sport we have decided to make in Kiev. The event is about to happen on the 25-th of June in front of Kyiv city national administration. Officially the tournament is about to be opened by the selected teams of Canadian and Ukrainian military forces. Among other teams that are going to participate there will be selected teams of Canadian and Ukrainian police, hockey schools, embassies, etc. The event will start at 10 am and will be lasting till the evening. Apart from participation and observation of the game the guests will be able to visit sugar house where the traditional Canadian delicacies are going to be sold, as well, one could get familiar and take photo with the true Canadian riding policeman in traditional uniform!’

As the assistant of Trade Councilor Liliana Zhilina noticed, Canadian goods from producer could be purchased at the sixth floor of Central Department Store after official opening of the tournament on hockey. The relevant and popular now waverunners and quadrunners, clothes with symbolic, delicacies, and true maple syrup are waiting for the guests.

Two more interesting occasions have been presented by the Head of immigration department – Councilor Lisa Kulomb. ‘I am pleased to be here and represent two events which are going to happen on the 11-th and 20-th of June. One of them is the Francophonie street at Kostelna where there is an embassy of Canada. We have organized this event in collaboration with other embassies, restaurants, and organizations. This day will be full of Francophonie atmosphere and colors. The event will last at 10 am and will be lasting till 10 pm. The entertainment and fun, delicacies with maple syrup, souvenirs with traditional connection! It is so pleasant to talk about the exhibition of photos that is going to be open at Sofievska square. We have organized it along with the embassy of United Nations Organization in Canada on the issues of refugees and human right organizations. The exhibition will depict Canadian history of giving shelter to the refugees that have been oppressed for race belonging, belief, worldview, etc. We invite everybody to get more familiar with Canada’.