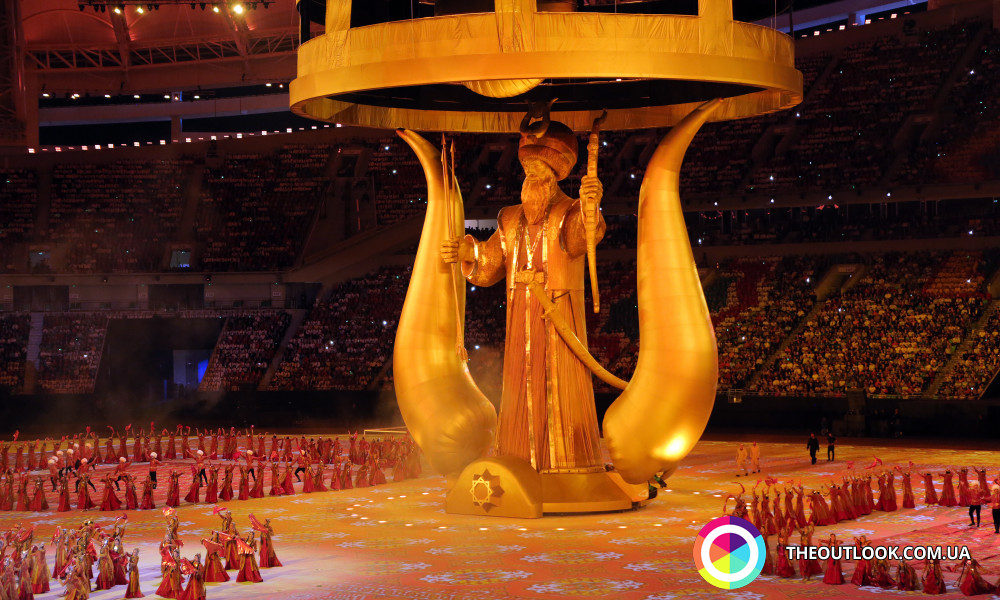 On Sunday, September 17th, symbolically at 20.17 local time, the 5th Asian Indoor and Martial Arts Games solemnly opened in the capital of Turkmenistan. It is the sports competition held every four years under the auspices of the Olympic Council of Asia and under the supervision of the International Olympic Committee. The team of the Ukrainian Internet magazine about the world OUTLOOK publishes its first highlights on this pan-continental sport event.

The opening ceremony of the largest sports tournament in the whole region got underway in the presence of more than 45 thousand spectators gathered at the Olympic Stadium, among them there were heads of state, eminent world politicians, iconic athletes, show business celebrities, and representatives of the world mass media.

The President of Turkmenistan Gurbanguly Berimuhamedov announced the inauguration of the event with a welcome speech, thanking the guests of honour for their visit to Ashgabat for the Asian Games 2017, and for the active participation of 62 countries in the Asian Games. In addition, the head of state noted milestones in the construction of the Olympic Village, which occupied the territory of 157 hectares, and told about the components of the complex. Words of gratitude to Turkmenistan for the high level of arrangements for the Games, opened speech of the President of the Olympic Council of Asia Sheikh Ahmed Al-Fahad Al-Ahmed Al-Sabah.

The distinguished guest noted the personal contribution of the President Gurbanguly Berimuhamedov and his supervision over all stages of arranging these multi-sports Games.

Sheikh also welcomed the team of refugees and athletes from 17 countries of Oceania, who will take part in the Asian Games for the first time.

"The volunteer movement supplementing all stages of the event, also made a tremendous contribution to the organization of the Games," said Sheikh Ahmed Al-Fahad Al-Ahmed Al-Sabah.

ASHGABAT IN EXPECTATION OF BIG SPORT The organizers arranged an incredibly sophisticated bright show, in the best traditions of such events, generously attributing it with national motifs. Turkmen sportsmen, choreographers, acrobats, musicians staged a memorable show for the guests of the capital with many complicated tricks and performances. The ceremony lasted three and a half hours, featured 7 500 performers, 75 000 costume pieces, 100 animals and according to various sources about 150 million dollars is the scope and figure of costs of this opening ceremony.

"It's hard to comment on event that has not been structured yet on the shelves of your memory. Instead of me, talk my emotions and admiration for magnitude of human imagination, majesty of the people, grandeur and accuracy of organization. I deeply appreciate the work. While watching the opening ceremony, I was wondering how much time and effort it takes to implement all the ideas. When a figure of the legendary hero Oguz-Khan appeared from the ground in the middle of the stadium arena, I was amazed. However, when there came acrobats displaying sport disciplines presented in the Asiada against the backdrop of night sky with incredible illumination and pyrotechnic show, joy from the beauty of this holiday brought tears to my eyes. Discussing the brightest moments with the colleagues from our magazine who also attended the opening ceremony of the Asian Games 2017, the journalist Margarita Getman mentioned an incredible musical show representing the Turkmen welaýaty (regions): 5 moving constructions with symbols of country regions looked like real oases of celebration. I would like to express a separate "bravo" to the riders, who surprised with amazing skills and virtuoso tricks on the extraordinary creation of nature - the Ahal-Teke horses. Only at the end of the event, I caught myself thinking how often I jumped from my seat greeting the performers, and now, in the morning after the show, I rise in applause to the organizers and Turkmenistan. Everyone should see this at least once in a lifetime." shared her impressions General Manager and Editor in Chief of theoutlook.com.ua Daria Karyakina 7.5 billion dollars - this amount was invested in the construction of the Olympic Village and its infrastructure, which now is one of the best in all of Asia. Having used all the technical possibilities to the maximum, the production company Balich Worldwide Shows, which is the "brain" of the opening ceremony, impressed numerous spectators in the stands and at the TV screens, combining both sport and entertainment.

Experienced foreign functionaries who can give a comparative assessment of the level of security, quality of sound and light special effects, observance of timings, expressed their admiration for the ceremony.

All you need to know about Asian Games

The fire-symbol of the Games was brought to the celebration venue on the Ahal-Teke horses across the whole of Turkmenistan from the giant Galkynysh deposit and was lit in the most dramatic way, as part of the ceremony over the stadium as the apogee of a grandiose celebration of sport and friendship.

The head of the production company Francisco Negrin says that the launch show was born in cooperation with the Ministry of Culture of Turkmenistan; therefore during the performances the guests saw pages from the history of the nation, the contribution of national heroes to its development, important modern assets of the country. The OUTLOOK project team, as far as its activities are concerned, constantly follows events of similar scale and international events, and we can assume that after reviewing the record of the show in ten years the level of the opening ceremony will not lose its impressiveness and will amaze with its super-technological quality, as it was today.

Of course, now it is difficult to talk about this, so let us revise the ceremony in time, but it was today that the kick off of the Asian Games aroused genuine pleasure for everyone, and this is out of question. Athletes say that such epicscope, inspire for sport achievements, so viewers should be ready for setting of new records.

We would like to remind our readers that the competitions will be held in Ashgabat from September 17 to 27. More than six thousand athletes will attend them from 45 countries in Asia and 17 countries of Oceania, as well as a team of refugees, led by a sportsman from Kenya.

We also would like to add that Balich Worldwide Shows will be responsible for the closing ceremony of the 5th Asian Indoor and Martial Arts Games, and surprises are reserved for dessert in Turkmenistan, although, what else can outshine such a breath-taking start?

Join sports: The world's most famous regattas
Regatta is a race competition between crews of sailing yachts. We have selected for you the coolest, the most celebrated, expensive and, sometimes, even dangerous blue water events in the world which, of course, will make anyone nervous, but just will not leave anyone indifferent. We depart, join us!

«AN HOUR BEFORE» the horse racing
Horse racing has always been an important part of secular society. This is a kind of solemn reception, where the noble people can compete in elegance, style and even a little pretentiousness. But at the same time, horse racing is one of the most difficult sports which requires special preparation, intensive training, and anxious care of animals. OUTLOOK was lucky to watch how the preparations for the race happened...