In Kyiv Day of Revival, Unity and poetry of Magtymguly and Turkmenistan Constitution Day 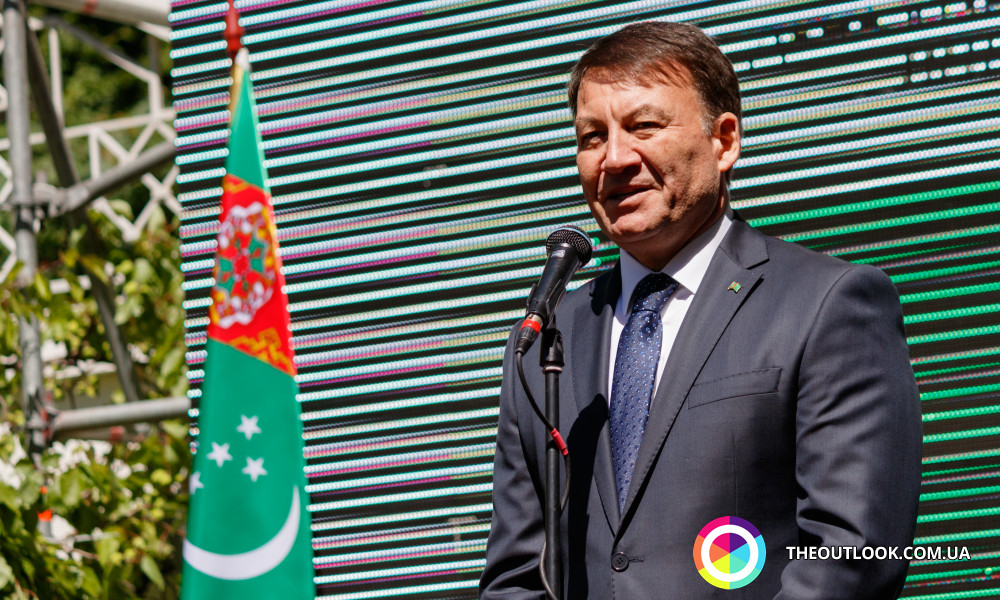 The Embassy of Turkmenistan to Ukraine and personally Ambassador Extraordinary and Plenipotentiary Nurberdy Amanmuradov organized in Kyiv an official event dedicated to the Day of Revival, Unity, and poetry of Magtymguly Pyragy as well as anniversary of Turkmenistan Constitution acceptance.

Starting the event, Mr Ambassador greeted the guests and congratulated his compatriots with the holiday, the 25-th anniversary of Constitution acceptance. ‘As it is remarked in Turkmenistan Constitution, the main value of the state is the human life, that is why all the activity of Turkmenistan authorities is intended for the establishment of better conditions of life for the citizens. The politics of Turkmenistan is the politics of peace and good-neighborly relations’, he made an emphasis.

On behalf of Ukrainian authorities at the event the Deputy of Ministry of Education of Ukraine Roman Greba gave a speech, and he noticed that Turkmenistan is the country with the rich history, country which has something to show and teach as well as the country which has truly dignified nation. ‘One of the noblest sons of Turkmenistan is the poet Magtymguly. This is a person who created the genetic code of the country, who formed the genetic identity of its citizens, this is what makes them a nation, what gives them greatness and invincibility. The pieces of Magtymguly have been translated into 147 languages, and it is the huge contribution not only in the culture of Turkmenistan but also in the world culture’, claimed Greba.

This day near the monument dedicated to the prominent classic of Turkmenistan his poem ‘About destiny’ sounded in Ukrainian language in performance of community activist, journalist, and politician, poet, Honored member of art community of Ukraine Pavlo Movchan.

The National art collective, vocal and choreograph ensemble ‘Zernyatko’ under the guidance of the honored worker of culture Raisa Zakletska performed the song at the poetry of Taras Shevchenko ‘Cherry garden near the hut’ while the soloist of ensemble Pavel Kutnyak read in Turkmen language the poem of Magtymguly ‘Atislerin’.

So as to express his respect and congratulate the head of diplomatic mission this day his colleagues came, such as the Ambassadors of Georgia, Romania, Iran, Uzbekistan, Palestine, Belarus, Cuba, Turkey, Kyrgyzstan, Kazakhstan, Tajikistan, General director of Directorate-General for Rendering Services to Diplomatic Missions Pavel Krivonos, representatives of state authorities of Ukraine, businessmen, and mass media.

The creativity of thinker Magtymguly who laid basis of Turkmen classic literature uniting the literal language with the conversational language of the nation, evolved all the sides of Turkmen life of that period. In his creativity, apart from the ideas, courage, heroism, patriotism, national identity, there are many poems that praised usual life. One of the distinctive features of his literal heritage is the organic connection of the creativity with the folk wisdom and folklore. Many words of the poet transformed into the proverbs and talks. The reason of such popularity is not only in the thoroughness of his words but also in elegancy and facility of his artistic form and language.

Annually the Ministry of culture and TV-radio broadcasting of Turkmenistan as well as other departments and communal organizations prepared the intense program of festive events dedicated to this holiday. In the museum the exhibitions of famous Turkmen masters-painters, graphic artists, and sculptures, while in educational establishments there are scientific conferences, literature meetings and creative competitions, in the theatres as well as cinema and concert halls there are literal and musical events.