Youtube
Статьи  >  Know  >  «Frida and Diego». Photo exhibition in Kyiv is dedicated to Frida Kahlo and her spouse

«Frida and Diego». Photo exhibition in Kyiv is dedicated to Frida Kahlo and her spouse 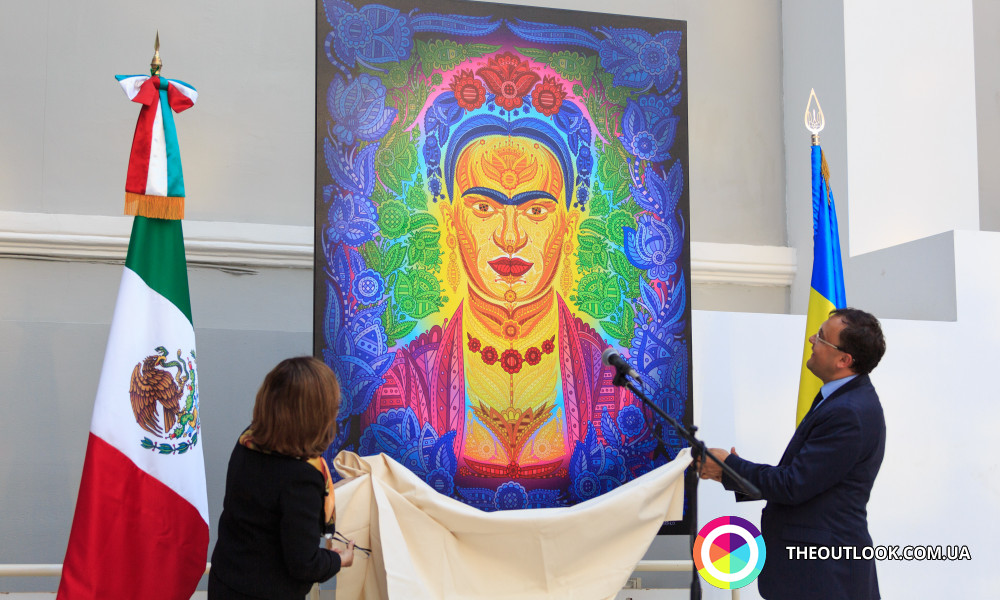 "Dali in a skirt", "The greatest provoker of the last century", shocking and inspiring confidence in the almost limitless potential of man, Frida Kahlo surprised contemporaries and continues to admire the admirers of her work today. The people of Kiev can now look behind the scenes of the life of the Mexican genius. With the support of the Embassy of Mexico in Ukraine in the National Museum named after Taras Shevchenko an exhibition of photographs devoted to the relations between Frida Kahlo and her husband Diego Rivera was opened.

The first "FridaFest" in the Ukrainian capital was officially opened by the Ambassador Extraordinary and Plenipotentiary of Mexico Maria Luiza Beatriz Lopez Gargalho. The head of the mission noted the interest of the Ukrainian public to the work of her outstanding compatriot and stressed her significant contribution to the development of world art. The presentation of the festival was also marked by the presentation of the painting "Frida - Ornament of Freedom" by artist Andrei Ermolenko.

The highlight of the evening was a symbolic carnival dedicated to the legendary artist, who loved life and fun. All the fans of Frida could enjoy Mexican music, dancing, bright costumes and treats. And those who best managed to convey the image of an outstanding Mexican, became holders of the cult book of Gerard De Cortães "Frida Kahlo. Ruthless beauty".

Most of all in life Frida loved life itself. Despite the excruciating physical suffering, she sparkled with humor, knew how to play a trick on herself, and entertained with all her heart. After suffering a six-year history of poliomyelitis, the girl was forever lame, her peers gave her the nickname "wooden leg". But the obvious physical defect only tempered the character: Frida engaged in boxing, swam a lot, played football and easily entered the prestigious school in Mexico to study medicine. At the age of 17, as a result of the terrible accident, Frida had an injured body, but no matter how terrible the drama was, in many respects it was thanks to her that the artist Frida Kahlo appeared.

Once confined to bed, she asked her father, the photographer Guillermo Kahlo, to place the easel above the bed, and to place a mirror on the side, so her first drawings appeared, most of which were her personal images. "I write myself, because I spend a lot of time alone and because I am the topic that I know best" – in such a way Frida Kahlo explained her love for self-portraits.

A significant highlight in the artist's work was the image of her husband Diego Rivera. "In my life there were two tragedies", Frida said. "The first is an accident, the second is Diego".

In the renowned Mexican artist Frida fell in love with the school, barely recovering from the injuries, Frida went to her idol - to show pictures. He was twice as old and was known as a notorious ladies' man. However, no one could stop the determined girl: in two years the couple played a wedding

The marriage of Diego and Frida was jokingly called the alliance of an elephant and a dove (the famous artist was much taller and thicker than his wife). Diego was teased by the "prince-toad", but no woman could resist his charm. For many years, Kahlo was betrayed by his wife, he claimed that no woman could be compared with her, but could not resist the new temptations. However, one artist could not forgive, when her husband changed her with her sister Christina.

In his native country, the first personal exhibition of Frida Kahlo was held only a year before her death, in 1953. Then Kahlo was already bedridden - she was amputated part of her leg. Despite this, the artist personally visited her exhibition. Frida joked and laughed to the last - including over her strange, broken fate. Today Frida's paintings are sold for a record for Latin American authors, and she is called the most famous artist in the world.