PHOTOptoject: Bali: The street of artists 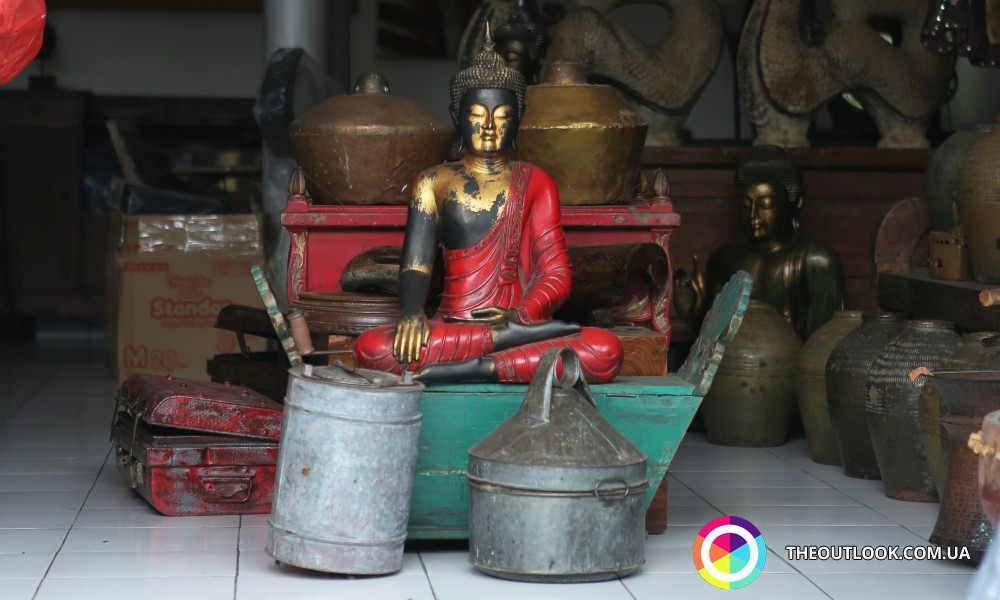 OUTLOOK continues to explore interestingsights of our planet. More recently, our photographers Nikita Panisov and Anna Kravchenko returned from the wonderful city Ubud located in Indonesia. This place, considered as the cultural capital of the state, impresses with many interesting things but most of all - its artist's street ...

So it turned out that since ancient times artists and creators of all suits from all the Indonesian and not only the islands came together in Ubud. According to the legend, the concentration of energy gracious for creativity here simply overflows. Today, their descendants continue to crafty and delight in their products, both tourists and Indonesians.

Ubud which is confidently on the various lists of Asian cities to visit for the average tourist, begins and ends in the center, with many temples, markets and people organizing a sightseeing tour to either the volcanoes or the jungle. Therefore, few people get to the suburbs because local merchants skillfully resell different handmade products, from the "same masters" but the shops and workshops themselves are located sideways, in the middle of the street, Jalan Raya Andong.

When you walk through it and see how the inhabitants of all Indonesia come here literally on trucks buying everything from souvenirs and decor items to unique furniture. You may have a feeling that you are in IKEA just everything is in open air. Almost every buyer goes to his "own" wizard, whom his ancestors could have redeemed a few centuries ago. Prices are three to four times lower than in the city center so when you get here, tourists forget about the small size of luggage on airplanes or the cost of transportation of "extra" pounds and they are doing shopping even better than the locals.

The atmosphere in the street itself can not be better encouraged by a measured contemplation and a calm choice: nobody touches anything and anyone does not call to go on a trip or practice yoga, a few people speak English and nobody screams such a phrase: "Buy from me". Artists are primarily focused on crafts, they say little about the trade, and only in essence and without unnecessary emotions.

Plans for 2019. Working Lunch with the Representatives of the Media from the Ambassador of Indonesia.
A year has to have a proper start and the OUTLOOK Project had it launched with a working lunch in the residence of the Ambassador of Indonesia to Ukraine Mr. Yuddi Chrisnandi. Representatives of the Embassy proudly presented projects that were organized by Socio-Cultural Department in 2018 and shared plans for the future.

The Embassy of Indonesia to Ukraine appareled the monument of queen Anna in Kyiv in the traditional wedding dress of Bali woman
The Embassy of Republic Indonesia to Ukraine under the auspices of Kyiv city administration caused a new tradition to change the clothes on the queen Anna monument at Lviv square in national dresses of different countries. The first dress in the wardrobe became the traditional wedding dress of Bali woman.

OUTLOOK JOINS CELEBRATION OF THE INTERNATIONAL DAY OF TOLERANCE
Today, on November 16 the International Day of Tolerance is observed, it was proclaimed in 1995 by the 28th General Conference of UNESCO.

ASIAN CUISINE AND CULTURE FESTIVAL IN KYIV
On November 8 Asian Cuisine and Culture Festival was held in Kyiv with the support of the Ukrainian representatives of diplomatic missions of Indonesia, Japan, Malaysia, Republic of Korea, Vietnam and Pakistan.

Hallooween: From world horror practices to local
On the eve of All Saints' Day OUTLOOK managed not only to stock up with pumpkins and sweep away fancy candles from all the nearby shops, but also to treat our readers to exciting facts about the celebration of Halloween worldwide and in our country. Trick or treat?

RECEPTION IN HONOR OF THE NATIONAL DAY OF MALAYSIA IN KYIV
On October 29 the Embassy of Malaysia in Ukraine successfully hosted a solemn diplomatic reception to celebrate the National Day.

Representatives of diplomatic corps get acquainted with Ukrainian culture
Along with high-quality provision for vital needs and functioning of foreign representative offices in Ukraine, the important objectives of “Directorate general for rendering services to diplomatic missions” (GDIP) is to demonstrate unique Ukrainian culture and traditions to foreign diplomats. For that, last weekend of September the private estate belonging to a public figure Igor Dobrudsky hosted a family style meeting for representatives of diplomatic corps.