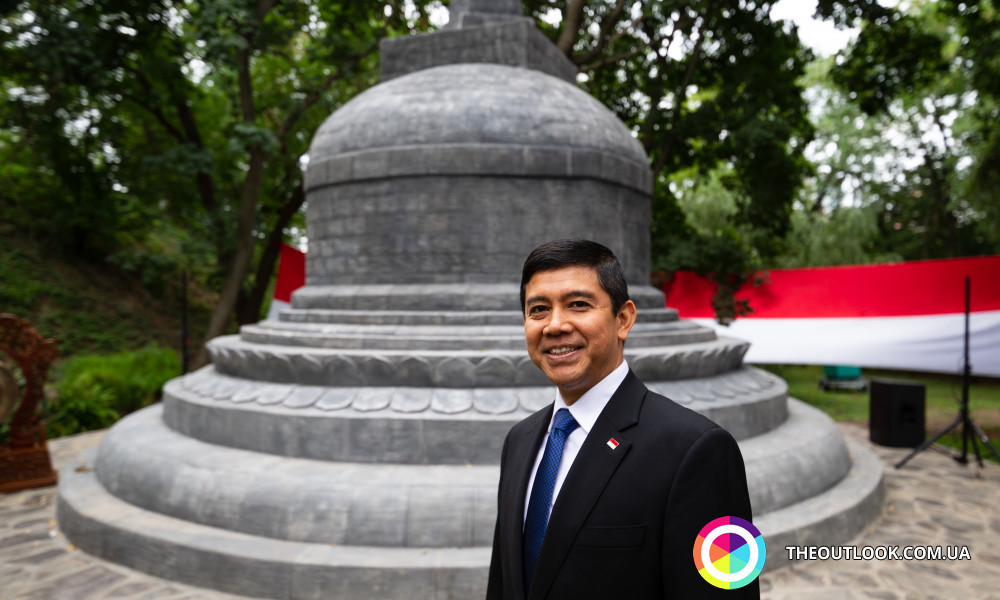 The height of Kiev Borobudur corresponds to the original, located on the Java island. It took 51 days for the masters to reduce this Buddhist stupa.

It was chosen to recreate Borobudur in the capital of Ukraine because this architectural masterpiece is one of the most visited locations among tourists in Indonesia, which has truly become the hallmark of the country.

In a welcoming speech, the Ambassador Extraordinary and Plenipotentiary of Indonesia to Ukraine, Yuddi Krisnandi, on behalf of the Government and people of the Republic of Indonesia, expressed sincere gratitude to the guests and the leadership of the Botanical Garden for their presence and he said: “Borobudur, which means a temple on a slope, is the largest Buddhist temple in the world, as well as the cultural heritage of the Indonesians which was built over a hundred years from the 8th to the 9th century AD, and the temple is located in the north of Yogyakarta, Central Java province. The stupa depicts a vast universe, a sacred place of spiritual life. Borobudur is a masterpiece that symbolizes the grandeur of Indonesian civilization, which was elected one of the seven wonders of the world, and in 1991 was designated by UNESCO as a World Cultural Heritage Site.

The Stupa we have presented represents a replica of one of the 72 Borobudur Stupas and corresponds in size to the original Stupas in Indonesia. This stupa was built by three Indonesian art construction masters whom we invited from Indonesia". 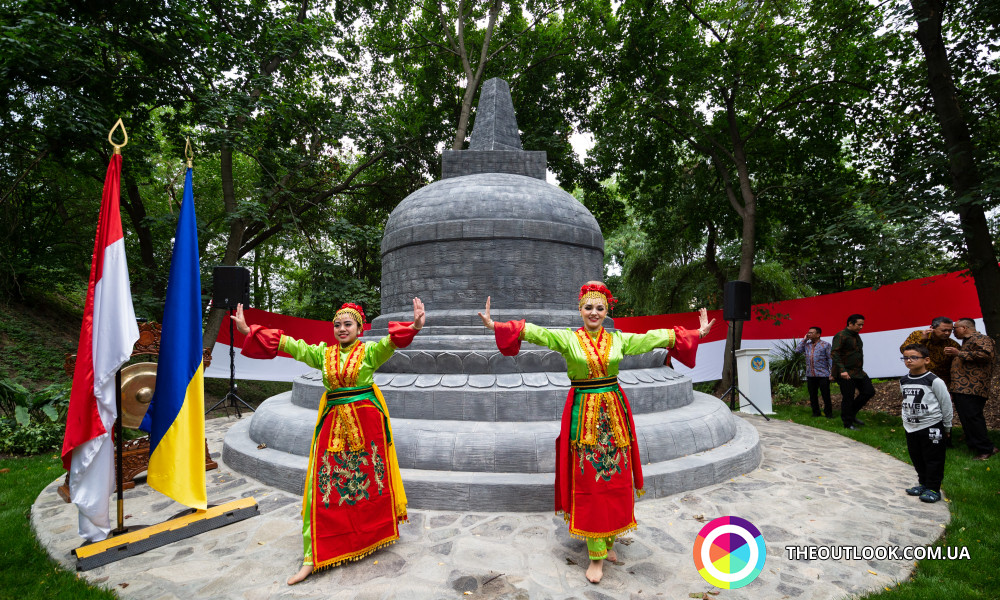 The idea of creating a new location in the Indonesian garden belongs personally to Mr. Ambassador:

“Once, in the summer of 2018, I visited the botanical garden and saw many Ukrainian families who visit the park and enjoy its beauty. Some of them sat, ran, played and were engaged in various types of activities. Then I got the idea to build something prettier in this place, something that came from Indonesia, and which beauty could always please Ukrainians. Therefore, Borobudur is an Indonesian masterpiece and has become a gift to the people of Ukrain. I am sure that Borobudur is seen as a source of creative inspiration for the next generations of our two countries - Indonesia and Ukraine, which will unite eternal friendship as part of the efforts of both states to promote world peace. May Borobudur’s presence in Ukraine inspire the world with the significance of unlimited friendship and eternal love”.

The open air event was accompanied by tastings of national dishes, performances and traditional dances.

We will kindly remind that the Indonesian Garden in the National Botanical Garden. N.N. Grishko was opened in 2017 with the support of a diplomatic institution.

This floristic island of the largest Muslim state in the world is created under the personal control of Mr. Yuddy Chrisnandi and the hands of Indonesian landscapers and gardeners.

The Indonesian garden is under construction, but now there is a pavilion built to carry out the Muslim prayer, the objects in the cultural style of West Java and Borobudur has become the central sculpture.

Have a look at OUTLOOK photo report from the opening ceremony of Borobudur in Kyiv in our gallery.