Youtube
Статьи  >  Know  >  Plans for 2019. Working Lunch with the Representatives of the Media from the Ambassador of Indonesia.

Plans for 2019. Working Lunch with the Representatives of the Media from the Ambassador of Indonesia. 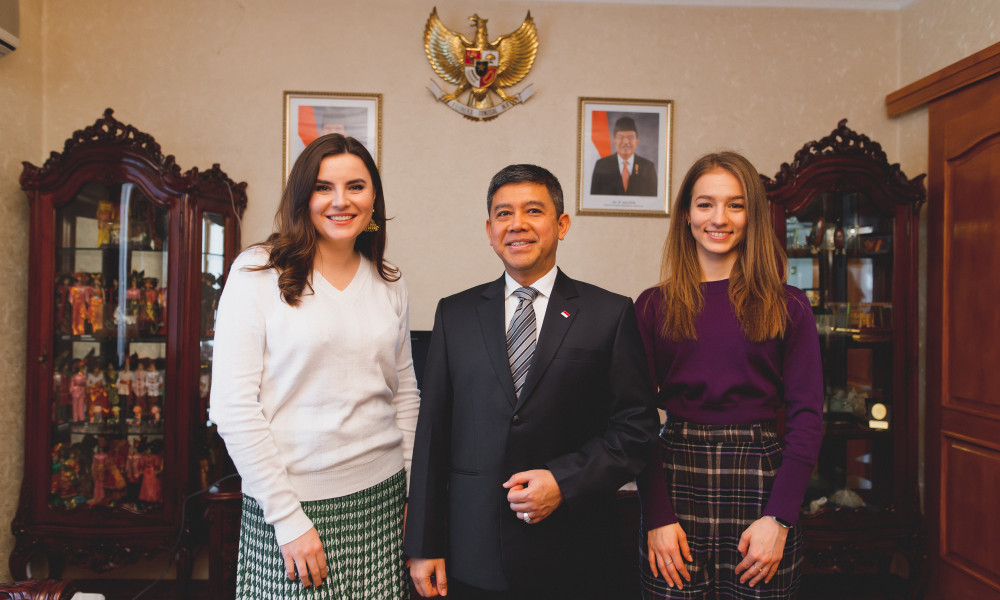 A year has to have a proper start and the OUTLOOK Project had it launched with a working lunch in the residence of the Ambassador of Indonesia to Ukraine Mr. Yuddi Chrisnandi. Representatives of the Embassy proudly presented projects that were organized by Socio-Cultural Department in 2018 and shared plans for the future.

Presentation of the work of the Embassy was delivered by the Head of Socio-Cultural Information Department Gatot Amrih Djemirin; in it he specified both significant events and the ones with public response. Among them there was a vivid opening of copies of Indonesian landmarks in open-air museum in Hydropark. Within the framework of the project, miniature Borobudur Temple, Jakarta Cathedral, Our Lady of Good Health Church, Istiqlal Mosque and Ulun Dan Temple were installed.

Read more on this event at: The Embassy of Indonesia added showpieces in Kyiv museum of miniatures

Special attention was dedicated to participation of the Embassy in culture and charity events. Among them our Festival of cultures of peoples of the world OUTLOOK WORLD CULTURE FESTIVAL and diplomatic fair Charity Bazaar were mentioned. Within the framework of OWCF, exhibit items and cultural features of Bali and Java islands were presented. Main “character” of the topical area was Barong, purposely brought for the event; authentic music instruments also sparked interest.

Read more about the festival at: Our first anniversary: OUTLOOK WORLD CULTURE FESTIVAL 2018

Mr. Gatot Amrih Djemirin announced a number of events for 2019 that are planned to be held with active participation of the Embassy. Opening of an unusual art object, Borobudur – a famous monument of Indonesia, will take place in May of this year at the Hryshko National Botanic Garden. Activities of the Embassy are not limited to holding events in Kyiv. This year the Embassy has an intention of celebrating 9th anniversary of installing of the World Peace Gong in Kremenchuk. This memorial sign is an Indonesian symbol for peace and it was installed to commemorate the terrorist attack on Bali Island in 2002. The sound that the gong makes symbolizes the end of war, new beginning and hope for the future.

Ambassador Yuddi Chrisnandi has been accredited in Ukraine for two years (also in Armenia and Georgia). Taking into account the importance of cooperation with the media in promoting Indonesia, within the framework of the meeting he organized presentation of Indonesian cuisine and was gladly sharing with the guests information on various and interesting Indonesian dishes that combine tastes from thousands of islands the country is located on. Tastes of Indonesians differ drastically depending on the region. Thus, for instance, northerners opt for spicier food unlike dwellers of the south; the latter ones have no peers in cooking delights and sweet potatoes, tapioca, coconut and cane sugar.

The Embassy plans to have this kind of tastings for a broad audience in 2019 to introduce Ukrainians to distinctive culinary features of Indonesia. The meeting was participated by the representatives of the leading media of Ukraine, among them 1+1, Inter, 112 channels, printed and online media.