If steeper, it would be a wall 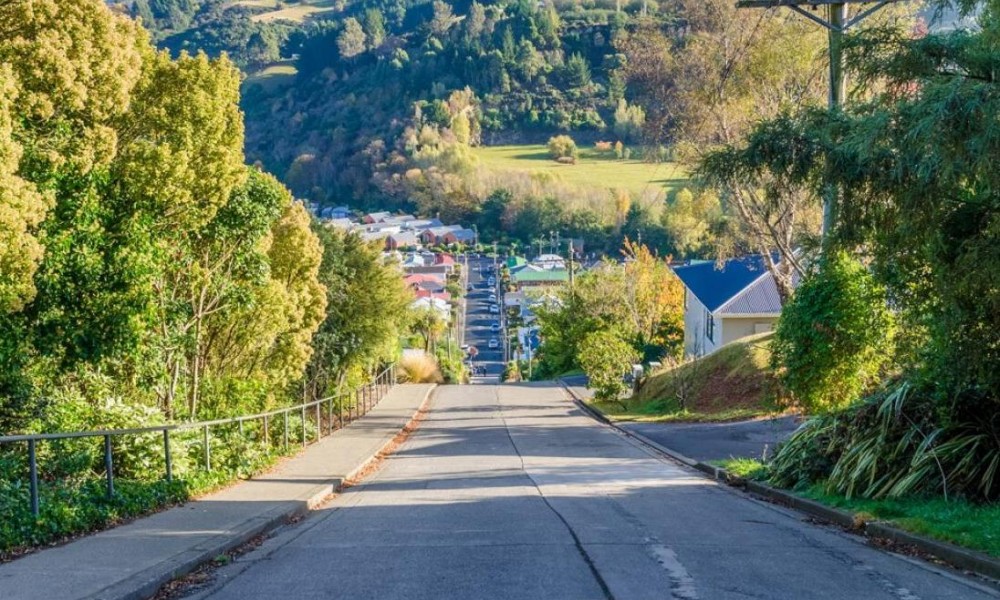 OUTLOOK keeps publishing series of articles about unique streets. Today we are going to tell you about a sharply angled Baldwin Street from the city of Dunedin, New Zealand. It is world-known not for luxury boutiques, upscale restaurants or fabulous real estate prices, in that respect everything looks pretty down to earth and basic. It is a gradient of the street that strikes - a 32% grade at its steepest section.

It is world-known not for luxury boutiques, upscale restaurants or fabulous real estate prices, in that respect everything looks pretty down to earth and basic. It is a gradient of the street that strikes - a 32% grade at its steepest section. This is certified in the Guinness Book of Records.

Who and under what circumstances hit upon the idea of designing such a miracle? It was back in the year of 1848 when Dunedin was being built up. Everything went fine, except for one point - the city layout was approved in London, in the capital of the British Empire part of which New Zealand was. Thus, a few thousand kilometres away from the country of kiwis and sheep, in a cosy office smelling of cigars and whiskey, a whiz architect Charles Kettle was developing his road plans, completely unaware that the north-eastern part of the city was not the most beneficial for paving streets.Photo expedia.com

The documents and reports brought from overseas territories did not advise Kettle enough on the real state of affairs. Eventually, the surveyor drew up the city main layout and sent it over the hills and far away forgetting about the street and the town. Then on site, the builders just shrugged their shoulders - and with 'can do' attitude forged ahead in all innocence...

Since then Charles Kettle must have hiccoughed more than once due to profanity collapsed on him by cabbies, postal workers, and just residents of the steep street named after the local publisher William Baldwin. By the way, many people live there, in the number of houses the street is not the second to any other.
Photo travelandleisure.com

It is a good thing that New Zealand is a well-developed country and it has just a bit less cars than inhabitants (2.5 million versus four), so that architectural "miscalculation" is felt by those pedestrians who move on Shank's mare. The length of the object is 359 meters, and it rises up as much as 80 meters.

Local people not only got used to the steepness, but also decided to promote it - a couple of annual events is hosted by the Baldwin Street: Baldwin Street Gutbuster and Cadbury Jaffa Race. The first is a footrace to the top and back down again. The event has been held every February for more than 25 years; it mainly attracts local inhabitants who have the opportunity to practice. The record was set in 1998 when the whole exercise took 1 minute 56 seconds.Photo nzherald.co.nz

Another competition beckoning tourists is a part of the Dunedin Cadbury Chocolate Carnival. It is not people running around, but small spherical candies bouncing down the street. Each sweet runner has an individual number and its own sponsor. At least 30 thousand of them are simultaneously released at the top of the hill. The first five funnelled into the finishing chute are winners. It usually takes from 15 to 25 seconds for sweet guys to roll down.

Unfortunately, the street is not only fun spot since the slope has been drawing attention of "self-made" extreme sports enthusiasts, so no one is surprised at fractures and bruises. However, sometimes it ends more deplorable. In March 2001, a 19-year-old girl attempted to travel down the street inside a wheelie bin. After earning a decent speed, the bin collided with a parked trailer, and rider received injuries incompatible with life. After this incident, the municipal authorities have been trying to control any movement in Baldwin Street. Surprisingly, accidents are rare.Photo nzherald.co.nz

Well, now you know which street is the reigning world champ in steepness, and if fate brings you to Dunedin, the star attraction will not be difficult to find.

Under the South Cross. Queenstown
Residents of Queenstown, like all New Zealanders, are among the first on the planet to meet the dawn. There are no children's homes, homeless animals. People are resistant to cold, so much so that at zero degrees go in T-shirts. Each of them has an average of nine sheep, and in nature there are practically no such dangers as mosquitoes and snakes.