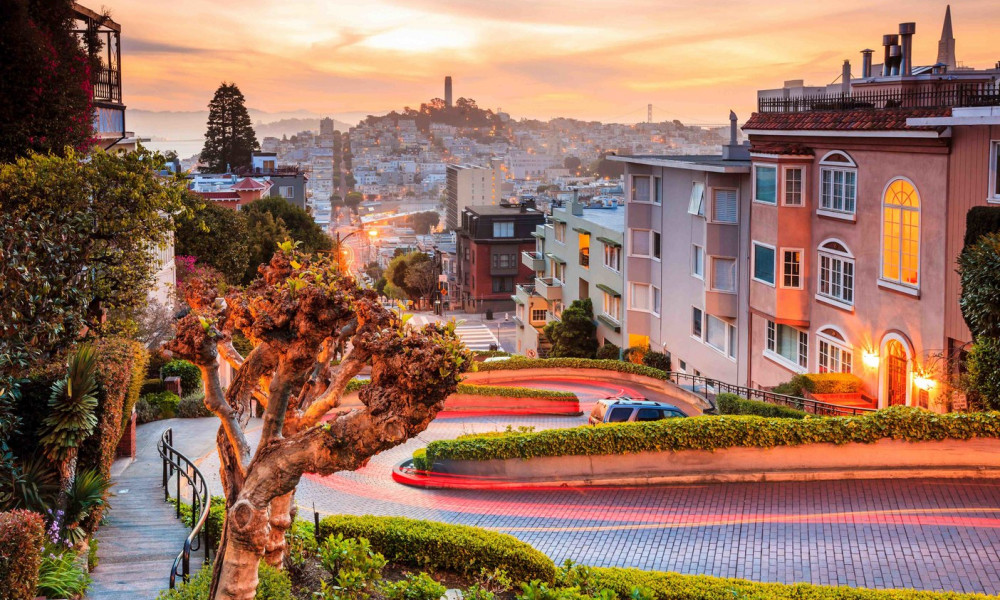 Remember how the little prince taught to see not a hat, but a boa constrictor digesting an elephant? So, in San Francisco you have the opportunity to see the street part of which is swallowed by a boa. A serpent Lombard Street crawled into almost all the Frisco city guides.

History of crooked Lombard Street began in 1922. San Francisco had been already settled at its 42 hills, and was not going to move anywhere, and residents began to settle there building their homes. It was necessary to address issues of infrastructure and roads, which was very painful for local authorities due to hilled lands.

Read also: History of the street: Piligrims of Berwick street

Slope, that was meant for a part of Lombard Street, was too steep with an angle of as much as 25 degrees. To prevent people and cars rolling down, Carl Henry concluded that angle of the street can be partially equalized, and the road may be safer if divided into short segments. Thus, a small piece 400 meters long turned into a zigzag with eight hairpin turns, and the angle of slope dropped to 16 degrees. Nevertheless, even after all that efforts, it still gives drivers’ hearts rate a healthy boost that every car is about to confirm the invincibility of laws of physics. This street is almost never empty, since it connects populated areas important for both local residents and tourist. Situated in the Russian Hill neighbourhood, it is close to Chinatown and other important areas, stretching from the Presidio Boulevard to the Telegraph Hill neighbourhood. The top of the crookedest streets offers incredible views of the San Francisco city and the bay. Pedestrians unwittingly become athletes developing their legs walking up and down stairs located on both sides of the road on Lombard Street.

Read also: We were there: New York, Washington and Miami

Since 1999, local authorities have organized a special department that is in charge of a snaky road segment and problems of the Lombard Street and its adjacent streets. Because of this high attention, the expression "to straighten Lombard Street" grew wings and became common. In 2001 the idea emerged that the winding portion should be closed for safety reasons, but plans did not come true. Today drivers are advised to overcome eight turns with the appropriate speed of eight kilometres per hour and traffic is only one-way - from top to bottom.Photo hotelunionsquare.com

Residents of mansions look after street pretty well, in the days of its appearance land between ziggedy-zaggedy turns was planted with gardens: trees, flowers, but eventually it was decided to limit greenery to low plants only, so now it features just small bush fences with tender cheeks of chubby hydrangeas looking out.

Read also: On the Road - Own Way

A sincere opinion of thousands of people about absurdity of decision to create such architectural marvel, was declared in the sketch of famous American humourist Bill Cosby: "They built a street up there called Lombard Street that goes straight down. And they're not satisfied with you killing yourself that way, they put grooves and curves and everything in it, and they put flowers there where they've buried the people that have killed themselves. Lombard Street, wonderful street."- enthusiastically says Cosby. Laugh and applause of the people in the hall that accompany this statement confirm complete understanding of what the comedian is talking about describing Lombard street. It should be noted that there are actually almost no serious traffic accidents there, but small collisions are everyday routine that is the result of slow movement and constant traffic jams in this part of this vertically endowed street.

Of course, such a strange shape is more than attractive for people of arts. So Lombard Street was highlighted in several films and games. Legendary Alfred Hitchcock chose Lombard Street to settle the main character of his movie Vertigo, 1958. A Mustang of Oscar holding Bullitt, 1968, was repeatedly noticed here, in the 60's it shocked audience with car stunts. Truly, life of Lombard Street was known by landscape-painter Rovena Ebdi whose workshop was situated here in the 20's. Over the time, the area began to acquire its prestige. Today the mansions, which blind passers by with their glass windows, are among the most expensive in San Francisco. Since the year of 2000 "artiodactyls" cars have been annually ousted by dozens of children three-wheeled bicycles, adult owners of which hold their competition. A race Bring Your Own Big Wheel was held at Lombard Street for several years, until the locals worried for their hydrangeas in bloom, evicted athletes to another curve route.Photo picjumbo.com

The street did not get empty so easy. In 2009, dedicated to the anniversary of the famous board game Candy Land, Lombard Street which by its form resembles a coloured trail of game board, has turned into a real caramel country. Bricks were covered by coloured, rubber floor mats and children's teams, accompanied by fairy-tale characters, played a party, overcoming all obstacles of giant game.