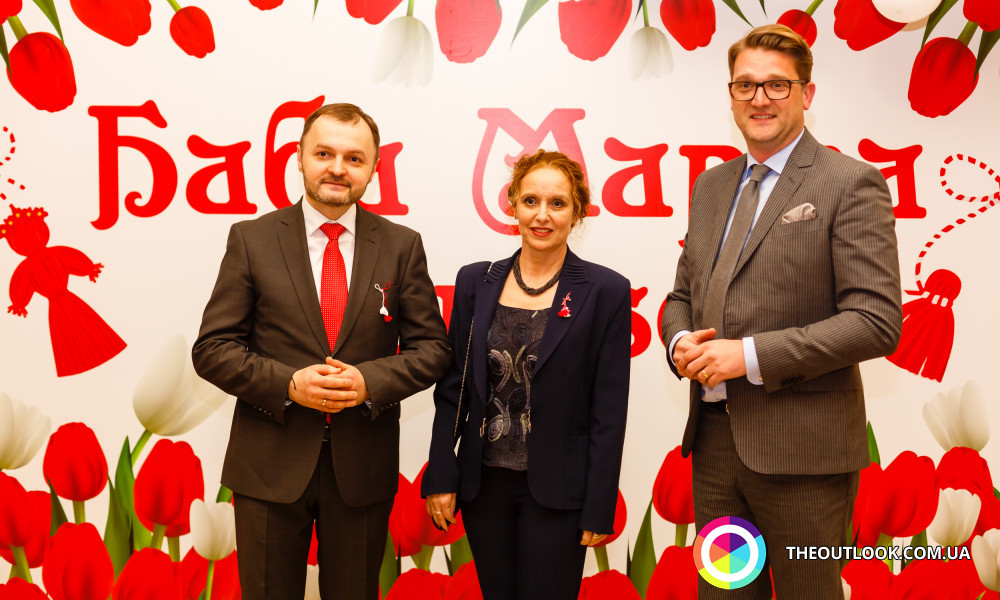 On March 12 at the premises of Petro Tchaikovsky National Music Academy of Ukraine, on the initiative of the Embassies of the Republic of Bulgaria, the Republic of Moldova and Romania, with the support of the Ministry of Culture of Ukraine and the OUTLOOK project was held a friendly welcoming spring in Kyiv.

It was the beginning of the tradition to celebrate solemnly Mărțișor/Baba Marta in the capital and we hope that it will have a worthy continuation and development.

Annually in the Republic of Bulgaria, the Republic of Moldova and Romania, on March 1 Mărțișor/Baba Mart celebrations begin and residents of the countries decorate their clothes or wrists with red and white ribbons and ornaments which symbolies the arrival of the spring season. These are not the only attributes of the holiday, but they are all filled with deep meanings, as well as associated with superstitions.

Guests among who are the Extraordinary and Plenipotentiary Ambassadors of Vietnam, Brazil, Belgium, Georgia, Palestine, Tajikistan, Moldova, Romania, Chargé d'Affaires of Bulgaria, Deputy Minister of Foreign Affairs and Deputy Minister of Youth and Sports learned about the celebration and differences of traditions during this gala in different countries, and also enjoyed pleasant moments during the performances of the groups, which specially arrived in the capital in order to bring everyone closer to the atmosphere of the holiday that now reigns in their countries.

In the concert program Bulgaria was represented by the Bulgarian ensemble “Balkan” which was the winner of all-Ukrainian and international festivals, in particular “Taurian Family” and “Dances Without Borders” and performer Anastasia Stebletskaya who charmed the jury in 2017 at the international competition “Lyubka Rondova” in Bulgaria and won the first place with her singing.

In Bulgaria this holiday is called Baba Marta. Baba Marta is an image that emerged from the pagan history of the Balkans. This is the only female image among the mythical creatures that are contained in the folk calendar of the country. As a real woman, Baba Marta has a changeable character and great strength. When Martha smiles - the sun begins to warm, and when she touches flowers - the spring life awakens, byt when she frowns - it snows. Martenitsa is a symbol of awakening and a cult of the sun. In the past, it was a guardian against evil spirits, red color protected against diseases, and white symbolized male power.

Mărțișor or Martenitsa is a traditional holiday for meeting spring also in Moldova and in Romania. Since March 1, people from ancient times give each other small boutonnieres in the form of flowers made of white and red threads.

They are worn near the heart for the whole month, and at the end of March, Mărțișor is removed and hung on trees. According to the belief of the one who did it, happiness will accompany the whole year.

Moldova was represented in the concert program by the ethno-ensemble “Stefan Voda”, artistic director Tudor Ungaryan. Over 33 years of activity the artistic group was able to convey its art to thousands of lovers of folklore.

The tradition associated with martsishor is the following. According to the legend, on the first day of March, the beautiful Spring came out to the edge, and saw how from under snow the snowdrop breaks. She decided to help the flower and began to clear the ground around. Winter saw it and got angry, called for a strong wind to destroy the primrose. Spring shielding the flower from the wind with its hands and overwhelming branches of blackthorn. A drop of blood fell from the hand of Spring and the flower came to life. That is how Spring won Winter. Since then, people wear martsishory symbolizing red blood on white snow. And white and red are interpreted as symbols of the struggle between good and evil.

Romania was presented at the concert by the folk ensemble "Mara", the cultural center of Sighetu Marmatiei. This year it celebrated the 50th anniversary of its activities. The ensemble proudly bears the titles of the laureate of many competitions, the special EUROPE prize of the Herder Foundation for folklore, the Golden Disc and the Silver Necklace (Dijon, France). This is one of the most valuable ensembles with Maramures, whose motto can be considered with such words: “What could be more beautiful than getting the identity of our spirituality from the dowry of our ancestors: song and dance”.

There are few ensembles, including professional ones, who decide to recreate such dances. Attitude, rhythm, vitality, drawing make them unique. They reproduce on the stage, in an artistic way, old customs and dances of the countries.

The costumes that guests saw characteristic of the ethnographic zone of Maramures. The guys on the head - the bug, the unmarried girls colorful shawl. The dance performed by the artists has become a symbol of joy and optimism, the revival of nature, the beginning of spring.

Beauty Ilyana Matus - one of the most popular folk music soloists in Maramures - a graduate of the conservatory at the University SPIRU HARET presented a long chorus and songs for fun.

And the choreographic composition "Take care of Ukraine" performed by the Academic Ensemble of Folk Dance "Sonechko" (Zhitomir, Ukraine), artistic leaders: People's Artists of Ukraine Tatyana and Mikhail Guzun became a bright final chord of the meeting. Hall applause standing saying thanks in such a way for the performance of artists. The evening was hosted by OUTLOOK project director Daria Kariakina.

The embassies-organizers express respect to the Ministry of Culture of Ukraine, the organizational partner project OUTLOOK, they thank the management and staff of the Petro Tchaikovsky National Music Academy of Ukraine for all-round support and professionalism, as well as the concert director, People’s Artist of Ukraine Aleksandr Kravchenko.