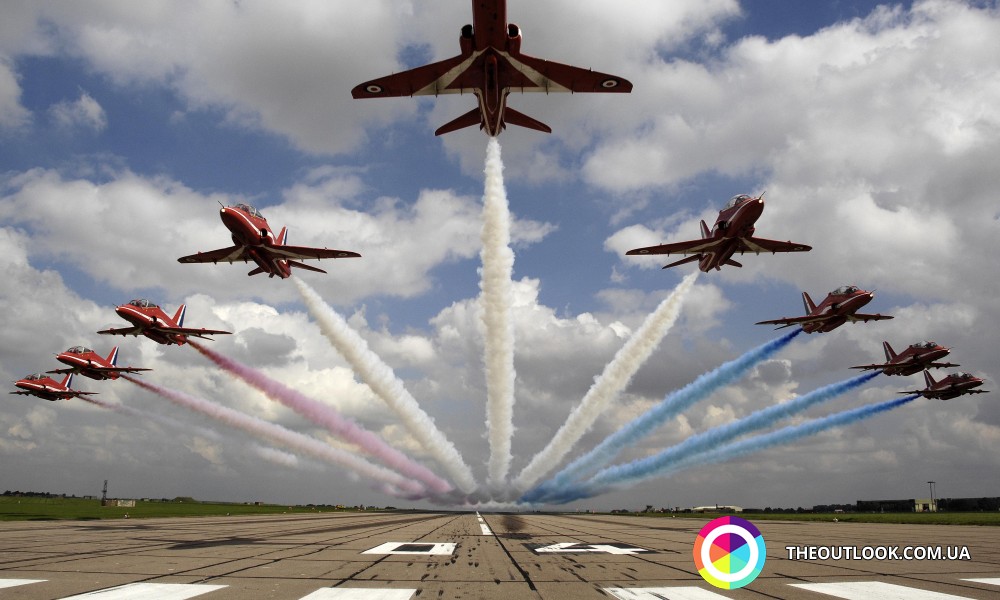 Today at the airport near the English town of Farnborough opens one of the largest air shows which mandatory program includes incredible aerobatic displays. Do not worry if you lack time to travel to the UK and get a first-hand look at nearly disastrous air acrobatics performed by world class pilots. OUTLOOK will tell you about similar events that are definitely worth checking out in the future.

This air show is held every two years, 12 km from Paris. For the first time this exhibition of "flying vehicles" gathered aviation enthusiasts in 1908, then flight performances began in 1949. Since then the air show has experienced a lot from the presentation of the legendary Boeing 747 and Concord, to the tragic crashes of Tupolev Tu-144 and MiG 29... In addition to the spectacular display, the event is a grand market. In 2013, for example, the total amount of contracts signed by the participants exceeded USD60 billion. Next time professionals and aviation fans are going to gathered not far from the French capital in June 2015, so start planning your journey!

History of the event is also traced from the past century. In 1909 it was held for the first time, however, in the territory of Frankfurt am Main. Within three months many onlookers were having up-close look at the amazing and complex structures, in particular the works of Zeppelin company. It was decided to strengthen success and excitement, thus the event moved to Berlin where three years later the next air show took place. Its highlight was the famous German airship. Today the capital of Germany welcomes thousands of various aircrafts from 40 countries.

The necks of the "classic" air shows feel breath of new aeronautical events, the most pompous of which is Dubai Airshow being second only to the leading European analogous shows. For the countries of the Persian Gulf Dubai Airshow is the most important market in the region. 960 companies attended the recent aerial festival to demonstrate their achievements, and in the human equivalent flying displays and performances pulled more than a whopping fifty thousand experts.

Russian international air and aerospace trade show is relatively young, first time it was held in 1993 on the airfield of Moscow suburban town of Zhukovskiy. However, shortly the gathering attracted a lot of fans and is bound to be more impressive with every passing year. This is largely due to the fact that this air show offers an up-close look at jaw-dropping stunts by the aerobatic teams of the Russian Knights and the Swifts (Russian: Strizhi). These guys are not easy to be lured for other similar events, so more and more aviation enthusiasts seek to visit Zhukovskiy. By the way, colleagues of Russian aces from aerobatic teams of the Patrouille de France (French Air Force) and the Frecce Tricolori (Tricolour Arrows – Italian Air Force) now also fly to Moscow suburbs in order to openly compete in skill.

This aeronautical event in the state of Wisconsin is holding the distinction of being held annually, it usually opens in late July – early August. Many onlookers claim that visiting this show is similar to watching movie with a large number of "D"s. Trendy aircrafts mixed with legendary ones, reconstruction of historical events (for example, Pearl Harbour attack) and hair-raising stunts – that's the essence of American aviation. By the way, it is the place where last year the Swiss pilot Yves Rossy known by the nickname "Rocket Man" very successfully performed his air acrobatics.