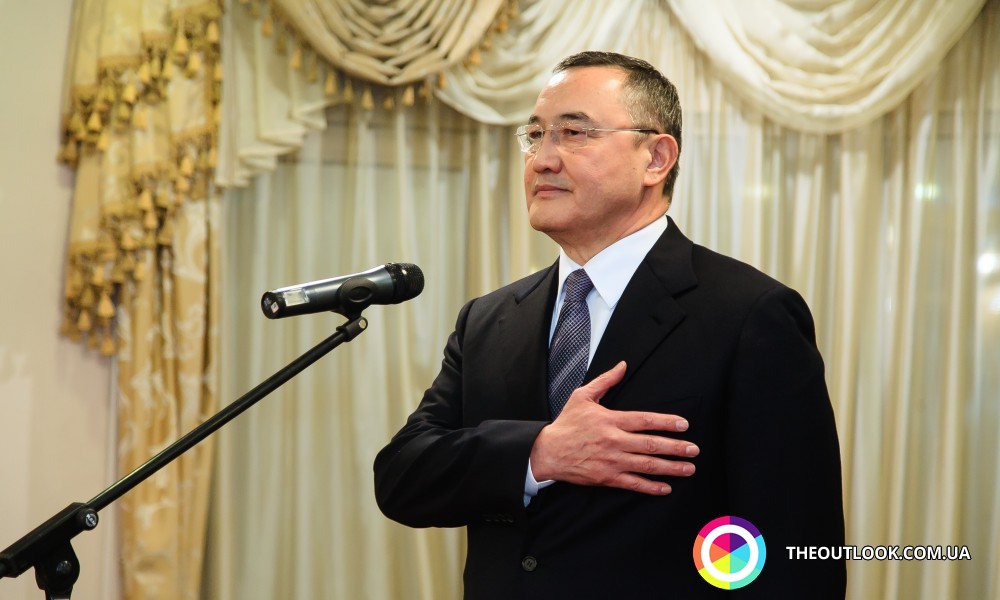 The event was attended by heads of diplomatic missions from such countries as Afghanistan, Belarus, Georgia, Korea, Vietnam, Indonesia, Romania, Tajikistan, Palestine, Iran, Cuba, Uzbekistan and many others. Among guests there also were representatives of expat communities, Clerical Board of Ukraine’s Muslims and Directorate General for Rendering Services to Diplomatic Missions.

Ambassador Extraordinary and Plenipotentiary of Kazakhstan in Ukraine Mr. Zautbek Turisbekov greeted all the guests of the event and noted that this solemn day, celebrated since 2012, is a very important event for the country and the date, December 1, wasn’t established by chance. First President of the Republic of Kazakhstan Nursultan Nazarbayev was elected that day in 1991 by national vote.

One of the first steps of the first president was to sign a bill that changed the name of Kazakh SSR for the Republic of Kazakhstan on December 10, 1991. Six days later, on December 16, 1991, Supreme Council of Kazakhstan proclaimed state independence of Kazakhstan which meant the country’s proclamation a sovereign state. Nowadays Kazakhstan is a recognized by global community modern democratic state and current President deserves a lot of credit for it.

Balanced domestic and foreign policy carried out by the head of the state ensured creation of a modern dynamically-developing state with socially focused economy. All these years legal as well as social and economic conditions were created and being developed for harmonious and comprehensive development of citizens, adherence of their rights and maintenance of their freedoms, preservation of interethnic accord and formation of civil society.

Ambassador Extraordinary and Plenipotentiary of the Republic of Kazakhstan Zautbek Turisbekov in his address also noted: “For 24 years already citizens of Kazakhstan proudly celebrate their main holiday – Independence Day. Current year 2015 is rather symbolic for the Kazakhstani: 550 years ago sharp in the centre of Eurasian continent Kazakh Khanate was founded by our forefathers.” At that Mr. Turisbekov particularly emphasized: “There is no doubt that new stage of Kazakhstani statehood is connected with the name of the first President of the Republic of Kazakhstan, National Leader Nursultan Äbishuly Nazarbayev. Under his immediate supervision gradual process of political, economic, social and ethno-cultural development and modernization of nowadays Kazakhstan is carried out”

The Head of the Kazakhstani diplomatic mission clarified general provisions of annual Message to People of Kazakhstan “Kazakhstan in New Global Reality: Growth. Development. Reforms”, he also told about the state program of infrastructure development Nurly Zhol and the National Plan “100 concrete steps on implementation of five institutional reforms.”

In his turn, head of group of Verkhovna Rada of Ukraine on intergovernmental connections with the Republic of Khazakhstan, Member of Parliament Ruslan Demchak congratulated the Kazakhstanis with the Day of the first President and Independence Day and noted that Ukraine-Kazakhstan relations have deep historic roots and high potential for further development.

Mr. Ambassador congratulated his fellow countrymen with the national day; he also expressed gratitude to the guests of the evening for accepting invitations to the event and for sharing this solemn holiday with representatives of Kazakhstani people.

Within the framework of the reception image-building videos about Kazakhstan were presented to the guests and a special photo exhibition on achievements of Kazakhstan over years of independence in economic, political, cultural, sport and other spheres was arranged. Also, dishes of Kazakhi national cuisine were largely presented.

To see photos from the event, please, visit our gallery: