10 facts about Bosnia and Herzegovina 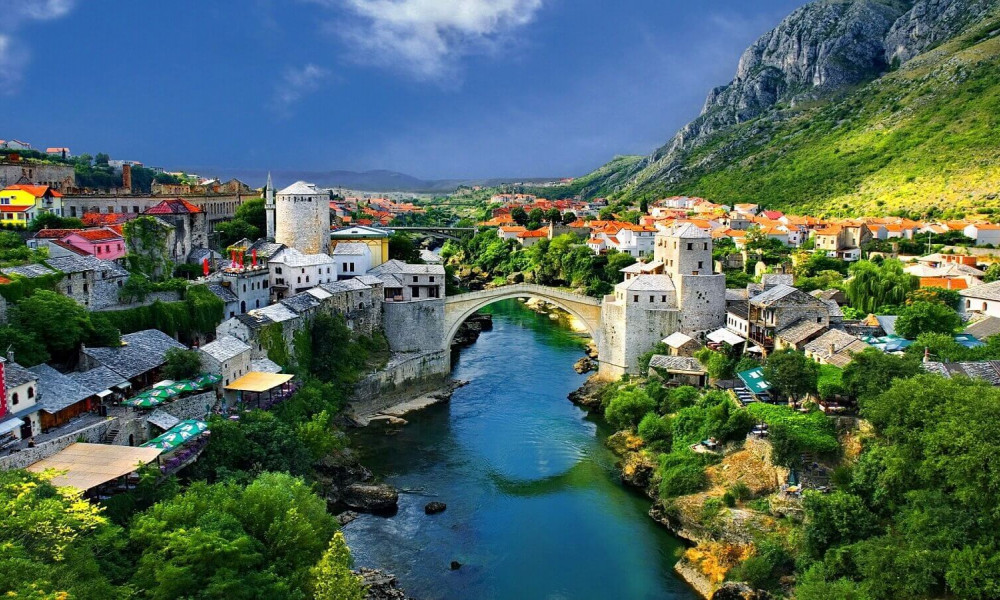 Bosnia and Herzegovina, as a modest beauty anchored between its vibrant friends - the neighbouring Montenegro and Italy stretched across the Adriatic Sea. It used to stay away from usual routes of holiday-makers and flashes of their photo cameras. Those who chase for flamboyant holiday, rarely look into the still backwater of greenery and picturesque mountains, and it works in favour of adherents of quiet holiday.

Today we will tell why you should take a closer look at this mysterious country:

Devoid of the bustle and hustle of hordes of tourists, Bosnia and Herzegovina still abound in the most bizarre corners of wildlife. The Perućica Forest Reserve, Europe’s last genuinely primeval native forests, originates there. As part of the Sutjeska National Park, atypical for the old Europe wild thickets are protected by UNESCO to preserve this wonderful world for future generation. Crystal clear springs, waterfalls running swiftly down the mountains, moss-covered giant trees, carpets of herbs and rainbow flowers filling sun-drenched meadows with their delicious scent - a sense of time fades away when you are breathing fresh air of freedom. Bosnia is included into the short list of countries that do not have their national anthem. Almost half of the residents of the state are the Bosnians or Bosniaks as they call themselves, more than 30% are Serbs, the rest of the population are the Croats and members of other ethnic groups. The presence of "versatile crowd" was the reason that during performance of the national anthem, each nation sings its own.

Another phenomenon unusual for the European "natives" is the magnificent herds of feral horses running free and wild on the Livanjsko polje (field), located on the way to Mostar. Once wild horses were tamed animals, but technological advances made them less important for agriculture. Farmers often let the horses graze without shepherds, thus releasing them into the wild and free life. During the Bosnian war, left unattended pedigree horses from horse farms joined herd of wild stallions. So the number of animals has increased to three hundred. Stećci, or ancient burial sites are unique Balkan necropolises, which are still preserved in the territory of the former Yugoslavia. The name stećci is a contracted form of the older Serbian word stojećak, which literally means the "tall, standing thing". Stećci were built as family tombs of high society. One such cemetery could have from thirty to several hundred tombstones. Each monument was made in the form of a chest with fine carvings of intricate patterns in the form of animals, harness and geometric shapes. In Bosnia and Herzegovina there was more than sixty thousand stećci, most of which are now in excellent condition. The monetary currency is called the Bosnian konvertibilna marka (convertible mark). This peculiar title it won in a dispute between the Bosnians, the Serbs and the Croats scratching their heads over how to call the state money. Exploring pockets, each of them found German marks. It turned out, that despite the nationality, all ethnic groups prefer banknotes from Germany - on that it was decided to name the local currency after mark. Remarkably, on the konvertibilna marka, you can see the inscriptions both in Latin and Cyrillic.

In the capital, there are still real atmospheric caravanserais. So in ancient times were called the versatile hotels hosting representative of any classes of society: traveling on business, trade merchants, their servants, and even camels or horses. The oldest inn of this kind, Kolobar Khan, was built of wood, which was the cause of its disappearance in the fire. But the stone Tashll Khan still pleases by its walls, dilapidated but breathing with history.

Another fascinating place in the lands of Bosnia and Herzegovina is a cave of gigantic sizes Vjetrenica. Magical nature has endowed this place with echo of splendid legend and fabulous beauty. The cave seems never had changed its appearance since the beginning of the earth's existence. Rumour has it that fairies live here: if you hold your breath, you can hear them whispering and weak melody coming from the depths of the cave. Air temperature here is always reduced to 11 degrees. Mysterious atmosphere is enhanced by the breeze and small picturesque lakes with special dwellers. For instance, a rare aquatic salamander olm or proteus anguinus, have chosen this place for its dampness and darkness.