200-th anniversary of Argentina’s Independence. In Kyiv the exhibition of artist Nora Iniesta 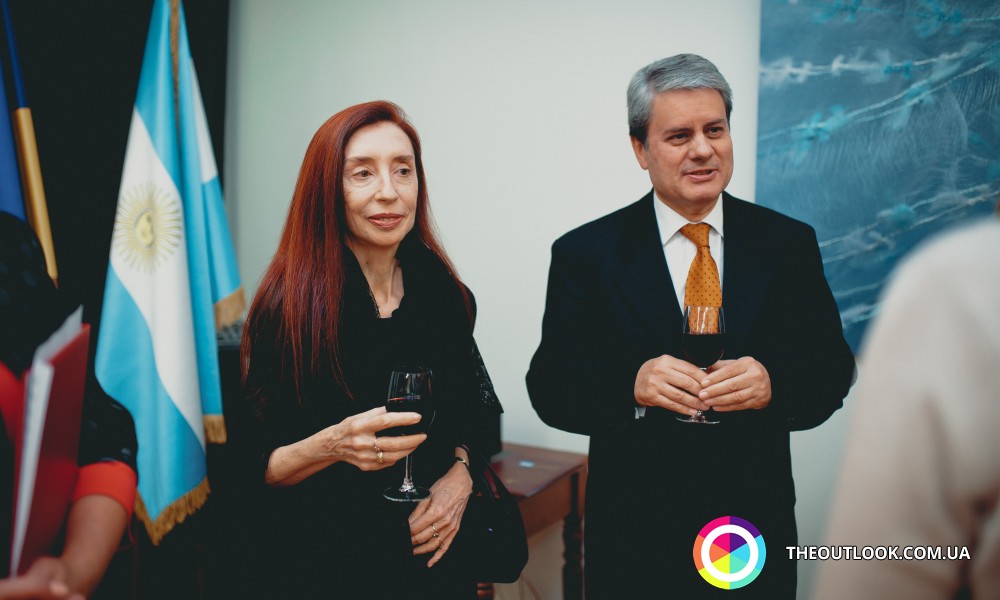 In the course of celebration of 200-th anniversary of the Independence of Argentina in Argentinean house in Kyiv the exhibition of the prominent painter Nora Iniesta has been opened. The leading motive of her creativity is love towards her birth place which she tries to express creating the images of her motherland in different genres of the visual art.

The official opening of the exhibition has been visited by the Ambassador Extraordinary and Plenipotentiary of Argentina to Ukraine Alberto Hose Alonso, employees of the embassy, representatives of Ukrainian community and culture. Moreover, especially for this event the artist Nora Iniesta herself came to Kyiv.

In her greeting speech the artist noticed: ‘Expression of respect towards the motherland and two-hundred-year anniversary of its independence means doing justice to the brave statesmen who came to Tucuman for acceptance of the main document, particularly, Declaration of Independence which we, Argentineans, honour annually on the 9-th of July. Peculiarly, these recollections of mine and memories of my childhood rise to the surface of mind and create these blue and white images, the works of Argentinean girl who embodies myself and whose activity I am incredibly proud of’.

The painter’s works are represented at the personal and group exhibitions in Argentina and beyond its measures. She participated in biennale and other prestigious events.

In 1980, Iniesta represented Argentina at the XI-th Biennale of young artists, Paris, France.

In 2002, Iniesta took part in the festival Open – 2002 ‘Female Fantasies’ which was conducted in the course of Venetian cinema festival in Italy.

In 2004, she performed as the painter-representative of Argentina at the second Biennale of modern art ‘CONART 2004’, Cochabamba, Bolivia.

In 2005, she accepted invitation to the exhibition of the modern art ‘One hundred artists for one museum 2005’ which was organized by municipality of Casoria city and Association of international center of modern art in Napoli in International museum of modern art of Casoria, Italy.

In 2009, Iniesta arrived to the 17-th Seoul international art-festival where she showed her works in Art gallery ‘Chosun Ilbo’, Seoul, Korea.

In 2010 and 2012 she was invited to participate in the festivals Open 2010 and Open 2010: installations and sculptures exposed open air on Lido happened in the course of Venetian cinema festival, Italy.

In February 2012, in honor of celebration of two-hundred-year anniversary of national flag (1812-2012), Iniesta represented her personal exhibition ‘Azul Celeste e Branco, (a Pátria Encontrada)’ (celestial blue and white) in the showroom of Embassy of Argentina in Federation Republic Brazil.

In October, 2013, Iniesta opened in Paris her exhibition ‘La Patria Encontrada’ (the motherland of the found) in Argentinean gallery of Embassy of Argentina in France. Afterwards, she came to Tunis so as to represent the exhibition ‘Celestial blue and white’ in Municipal art gallery named after Hedi Turki, Sidi Bou Said.

In 2014, she participated in the 18-th Seoul international art festival.

In 2015, the Corea Image Communication Institute (CICI) invited Iniesta as the representative from Argentina at the sixth cultural and communication forum 2015, Seoul, Korea. As well, the artist demonstrates her works under the name ‘La Niña Argentina’ (Argentinean girl) in the embassy of Argentina in Seoul. On the 2-nd of December the same year she opened a new exhibition of the author works in National library of Morocco capital, city Rabat.