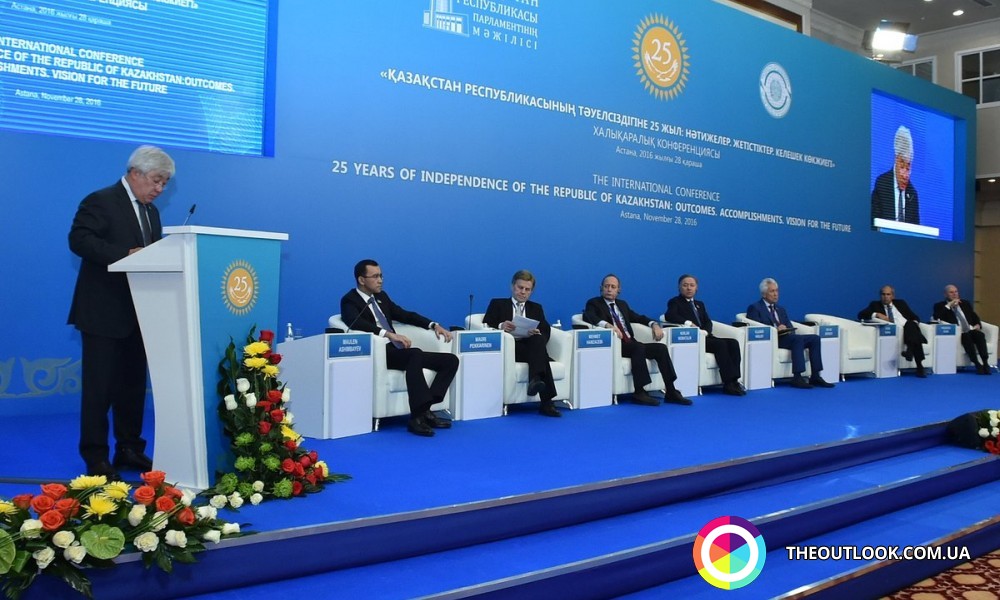 Kazakhstan is celebrating the 25-th anniversary of independence. During this time the country coped with a great deal of challenged with the dignity, and now it has something to share with others. On the 28-th of November it was the International conference ’25-th anniversary of Republic Kazakhstan Independence: Results. Achievements. Glance into future’. The event evolved three main period of the history. Exactly, it showed why the experience of the past is important, how the nation in Kazakhstan is living at the moment and what tomorrow will bring us.

The plenary meeting was opened by the official representatives of Kazakhstan, particularly, by the greeting speeches by the Head of Majilis of Parliament of Kazakhstan Republic Nuiran Nigmatullin, Minister of foreign affairs Yerlan Idrisov, deputy head of the parliament of Belarus Boleslav Pirshtuk, and deputy head of parliament of Turkey Mehmet Akif Hamzachebi. The speeches were performed also by the deputy head of the State Duma of the Federal Assembly of Russian Federation Vladimir Vasiliev, as well as the guest from Finland, the first deputy head of parliament Mauri Peccarinun. Apart from that, the business meeting was attended by the head of Institute of Central Asia and Caucasus of university named after John Hopkins Frederick Starr. The representative of American science shared some sweeping generalizations from the conceptual report ‘Kazakhstan 2041: the scriptures of development for the next 25 years’.

At the first session there were results of political and economic reformations arranged in Kazakhstan investigated. The attention was given to the issues of building of democratic state in the conditions of drastically developing market economics. In quite a detailed manner the advantages of strategy of social and political development implemented in Kazakhstan were discussed. The strategy mentioned was more known as the Plan of nation ‘100 precise steps’. This discussion was especially significant because of participation of the personalities brought into play in questions of creation and fulfillment of the stated reformations in Kazakhstan Republic, particularly, Akim of Astana city A.O.Isekeshev famous because of his introduction of innovative technologies in the issues of manufacture, tourism, export, logistics, nuclear energetic, coal industry, and gold mining as well as Director of the Institute of world economics and politics of the fund of the First President of Kazakhstan Republic S. Akimbekov. The representatives of other states shared their own experience and expressed their own approbation to the huge massive of the positive innovations implemented in Kazakhstan. For instance, in the course of the first session one could listen to the speeches of the deputy head of the House of Representatives of national meeting of Belarus Republic B.K. Pirshtuk, chief executive officer of Institute of economic strategies A. Ageev, Chinese guest dealing with the investigations in the Ministry of foreign affairs Sui Cian, the deputy of Federal meeting of Federal Republic of Germany.

In the course of the second session the speakers dedicated the performances to the strengthening role of Kazakhstan in international politics. Particularly, there were noticed some political achievements of the state, such as selection in United Nations Security Council, entering the World Trade Organization, assignment of the agreement of a new generation with European Union and, certain, they could not leave out in the cold the active participation of Kazakhstan in Eurasian economic union. International guests made an emphasis on the fact that the appliance of the method of ‘multivector politics’ plays the significant role in the global activity of Kazakhstan. The experience of fulfillment of external political strategies with the presented people was shared by the deputy of the committee on international affairs, defense and safety of Majilis of Parliament of Kazakhstan Republic M.S. Ashimbaev, deputy head of Jogorku Kenesh of Kyrgyzstan Republic A.S. Omurbekov. The representative of the USA A. Coen, the senior officer of Atlantic Council expressed its adoration with the politics of Kazakhstan implemented for such a shorted tem in a master way. Apart from that, discussion invited the Director of Program of Central Asia of European centre on investigation of safety problems named after J. Marshall G. Glison, scientific employee from Swiss Institute on the investigation of issues of safety and development Yu. Angvall and head of committee on external politics of Seim of Latvia O. Kalninush.

In the course of the third session the speakers searched for the answers for the crucial issues, particularly, how Kazakhstan is going to develop in long-term prospective, what is waiting for the country in five, ten, and twenty-five years, which states are going to influence the lifestyle in Kazakhstan Republic. The representatives of Kazakhstan shared the forecasts at the nearest years with the listeners, exactly, S. Kornell, the Director of Institute on investigation of the problems of safety and development. Hungary was represented by the deputy of State Assembly M. Bartosh, Poland by Coordinator on the issues of Russian Federation of Institute of Eastern investigations V. Sokolovski, Iran by Councilor of Ministry of foreign affairs S. Musavi, Kyrgazstan by the President of Institute of social politics M. Imanaliev, Russia by the Director of Analytical centre of international investigations of Moscow State University of Foreign Affairs A. Kazantsev.

Arranging intensive and informative meetings, all the participants of the conference came to conclusion that during 25 years having lasted from the time of independence announcement, Kazakhstan successfully embodies political strategies, mended fences with organizations of international significance and organized important reformations inside the country aimed at improvement of life and prospects of the citizens. Experience of Kazakhstan is recognized at the world level what was testified by the majority of speakers representing developed countries that agreed with the fact that Kazakhstan is coming with a wet sail at the way of prosperity.