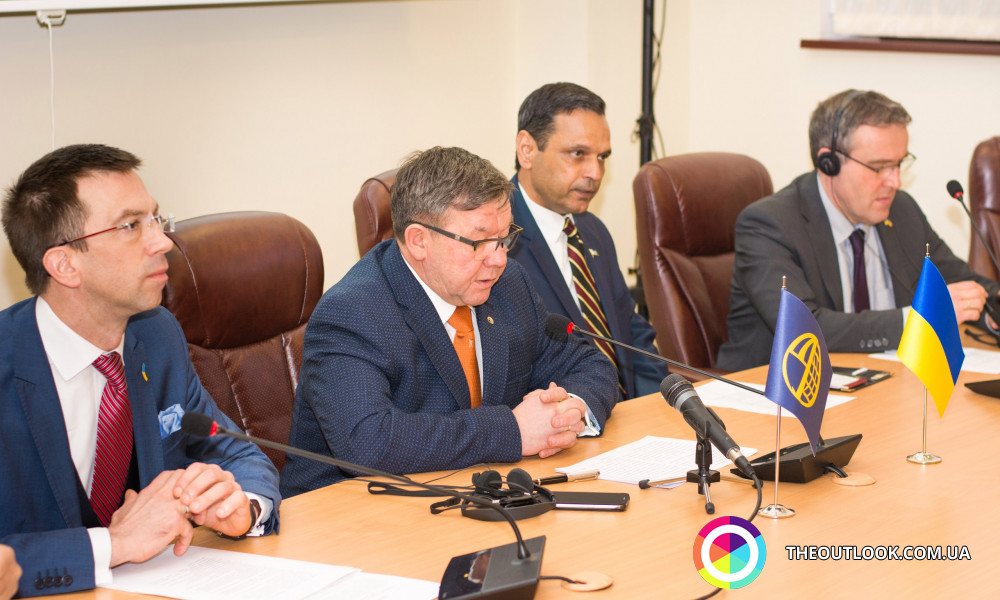 On 15 February 2017, the announcement of upcoming events important for diplomatic and public life took place in the Media Center of the Directorate-General for Rendering Services to Diplomatic Missions. The event involved representatives of 40 foreign diplomatic missions, media and scientific community.

During the opening speech, Pavlo Kryvonos, Director-General of GDIP, encouraged Ambassadors Extraordinary and Plenipotentiary, representatives of Embassies to engage in activities of the Media Center and use it as a platform for communication between diplomats, press and youth. Because society nowadays needs more historical and spiritual information.

Andrii Zaiats, State Secretary of the MFA of Ukraine, expressed hope that GDIP Media Center will be a real press-club and place for communication between diplomats. “I would like to use this opportunity to remind you that the President of Ukraine P. Poroshenko declared 2017 as the Year of Ukrainian Revolution of 1917–1921. A number of important commemorative events dedicated to the liberation struggle are planned to be held at the end of the year with the participation of GDIP and the Scientific Society of History of Diplomacy and International Relations. Because it refers to the revolution as well as the first diplomatic steps of the Ukrainian State 100 years ago. So, I am announcing a series of commemorative events in this regard. This year, on 22 February, we also celebrate the 100th anniversary of the establishment of first Ministry of Foreign Affairs and invite everyone to visit the renovated museum in the Diplomatic Academy”, the State Secretary of the MFA of Ukraine announced.

Mathieu Arden, Executive Director of the French Institute in Ukraine, announced the upcoming events in the framework of the French Spring in Ukraine. Mr. Arden said that from 10 to 31 March the Institute and the francophone Embassies plan to implement a number of cultural events to promote the French language and culture. The French Spring begins on 1 April in Sophiivska Square and ends on 29 April under the Arch of Friendship of Peoples. “We are going to conduct over 50 events in 8 cities of Ukraine. Most of them are free, so we hope that many visitors will get acquainted with our culture and see how strong the ties between Ukraine and France are. They are much stronger than they were 5 years ago. One of the creative projects, which promote cooperation between our countries, includes performances and exhibitions”, said Mr. Arden.

Luc Jacobs, Ambassador Extraordinary and Plenipotentiary of the Kingdom of Belgium to Ukraine, invited everyone to take part in the Francophonie events in March this year. The Embassy of Belgium is going to open the event with a concert at the Chaikovskyi National Music Academy of Ukraine. Francophonie is not only an opportunity to unite the French speaking community. It is also an opportunity for all those, who like the French language, culture and share common values, including tolerance, to get involved. Mr. Jacobs also presented the Honorary Consul of the kingdom of Belgium in Lviv Yaroslav Hartsula, who prepared and published a book called “Belgium: So Far, So Close...”, which is dedicated to the 25th anniversary of diplomatic relations between our countries. “Relations between Ukraine and Belgium date back to old times and were officially established over 25 years ago. The book of Mr. Hartsula describes centuries of cooperation and interaction between representatives of our countries, therefore it will be of interest to those studying diplomacy as well as world history”, the Ambassador said. After that, Yaroslav Hartsula introduced the above-mentioned book, which took five years to write, and noted that Ukrainians and Belgians are much closer than they seem at first glance. Everyone will assure himself or herself of it after reading the book, because the author gives many interesting facts about the history of Belgium and Ukraine as well as the past and current relationship between Western Ukraine and Belgium.

Lee Yang Goo, Ambassador Extraordinary and Plenipotentiary of the Republic of Korea to Ukraine, delivered a speech on new forms of public diplomacy, and Athar Abbas, Ambassador Extraordinary and Plenipotentiary of the Islamic Republic of Pakistan to Ukraine, spoke about the role of media in conflict situations.

Representatives of the scientific community were also invited to take the floor. Initiatives for cooperation and future plans were presented by Iryna Matiash, Head of the Scientific Society of History of Diplomacy and International Relations, Doctor of Historical Sciences, Professor; Anatolii Denysenko, Editor-in-Chief of Diplomatic Ukraine Scientific Yearbook, Candidate of Historical Sciences; Viktor Kamaiev, Vice-President of the Science Park “Kyivska Polytechnika”, Candidate of Engineering Science. The latter introduced young scientist Yevhen Kovalenko, a member of the university team that developed and launched a nanosatellite into orbit.

Maksym Kushnarov, public figure, cofounder of the Historical and Cultural project “Oberih Chasu”, told the story of creation of the book titled “Ukrainka”. It contains examples of struggle for happiness and achievement of goals throughout the whole history of our nation. Through hard work, Ukrainian women have contributed to all spheres of social life: art, culture, science and education. The most dramatic loss for every nation is the loss of its historical memory, which is a foundation for raising national consciousness. “Historical past has formed our present. That is why Ukrainian women exemplify love, strength, beauty and goodness up to these days”, Maksym Kushnarov said.

Serhii Tomilenko, Acting Chairman of the National Union of Journalists of Ukraine, First Secretary of NUJU, and Yurii Artemenko, Head of the National Council of Television and Radio Broadcasting of Ukraine, expressed support for the opening of such centres, which will contribute to deepening of cooperation between Ukrainian and foreign journalists.

The presentation concluded with performance by representatives of the Romany theatre “Romans”. The People’s Artist of Ukraine Ihor Krykunov invited all the participants to celebrate the International Romani Day during Amala Festival on 8 April.

The event was full of new ideas and ambitious plans, which deserve to be implemented.