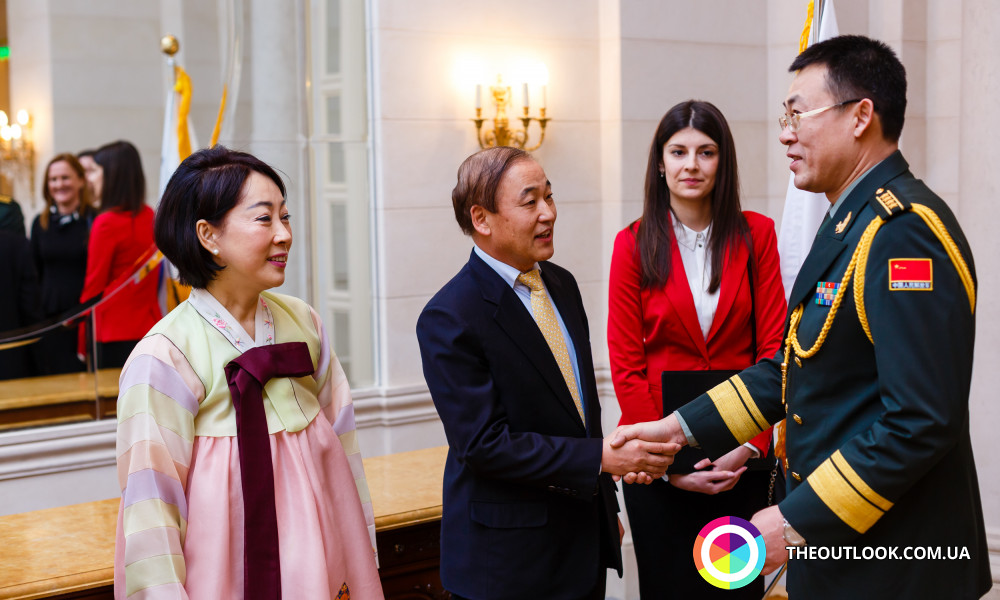 The Ambassador Extraordinary and Plenipotentiary of Korea to Ukraine Li Yan-Ghu organized an official reception in honor of the 25-th anniversary of establishment of diplomatic relations between Republic Korea and Ukraine. This day the respect and congratulations towards the Head of mission were expressed by his colleagues, particularly, diplomats, people’s deputies of Ukraine, representatives of government, business circles, community, and mass media.

Among the guests of the holiday there were Ambassadors Extraordinary and Plenipotentiary of Algeria, Argentina, Bulgaria, Great Britain, Georgia, Kazakhstan, Turkmenistan, Palestine, Armenia, Romania, Morocco, Belgium, Macedonia, Malaysia, India, USA, Canada, Minister of education and science of Ukraine Liliya Grinevich, Head of Zaporizhzhya regional administration Konstantin Bryl, People’s Deputy of Ukraine, head of deputy fraction of Verkhovna Rada of Ukraine on the interparliamentarian connections with the Republic Korea Serhii Larin, representatives of Ministry of Foreign Affairs of Ukraine, General-Directorate for Rendering Services to Diplomatic Missions, as well as representatives of the church.

Starting the event, Mr Yan-Ghu remarked: ‘Today we celebrate the 25-th anniversary of establishment of diplomatic relations between Republic Korea and Ukraine. I would like to express the special gratitude to those who contributed largely in the development of our relations during these 25 years’.

The Ambassador reminded about the most significant achievements which he was able to reach for 25 years. ‘In the centre of investigation and innovations of Samsung more than 600 highly qualified Ukrainian experts in the scope of IT have worked. Ten speedy trains Hyundai Rotem make the course among the main cities of Ukraine. POSCO Daewoo became one of the main players at the market of export of Ukrainian grain’.

As Mr Ambassador told, in relations between our countries we should follow three principles, such as orientation to values, global view and future.

He also marked that there are real plans on the implementation of these three principles in Ukraine: ‘In my opinion, it could be ‘Wonder on river Dnipro’ which is going to look like ‘Wonder on river Reign’ and ‘Wonder on river Han’ in Korea. In the city of education and technique Kharkiv one may create the new ‘Silicon valley’ using the experience of Korean technical valley Pangio. In the port town Odessa it is possible to make the second Rotterdam, likewise the special economic zone Sondo in Korea. Lviv will become one of the main medical hubs of Europe. Ukraine also can become one of the leading hubs of the alternative energetic in Europe. In Kyiv Hydropark it is highly likely to create the second island Yondo that is about to become one of the most beautiful islands of the Europe. On the river Dnipro there is a probability to create the center of logistics and tourism, moreover, in Korea ‘Project of four main rivers’ was implemented.

He also remarked that in the agriculture, industry of the future, Korea along with Ukraine may develop the sixth industrialization of agriculture that may include farming, recycling of products, alternative energetic, biotechnologies, logistic, and tourism.

‘In political scope it is expected for the visit of deputy Prime Minister of Republic Korea in March, arrangement of several intergovernmental commissions in the first half of the year. In economic scope both countries have been working over investment platform for the fulfillment of common projects in such areas as building and modernization of nuclear electrical stations, solar energetic, common production of high-speed trains, grain terminals, automatization of the system of city transport, greenhouse facility, elimination of waste, banking sector, modernization of the hospitals, Internet business, system of central heating of the cities and other projects’.

Mr Ambassador also expressed hope that in the nearest future it is bound to make even direct races between Kyiv and Seoul.

‘Both countries now encountered the significant challenged. However, I am convinced that we are able to transform these challenged into a blessing and become the creators of the hope, prosperity, make European integration faster and keep peaceful sky above’, summarized Ambassador.