100 years of independence of Baltic countries. The Ambassadors of Latvia, Lithuania, and Estonia make friends 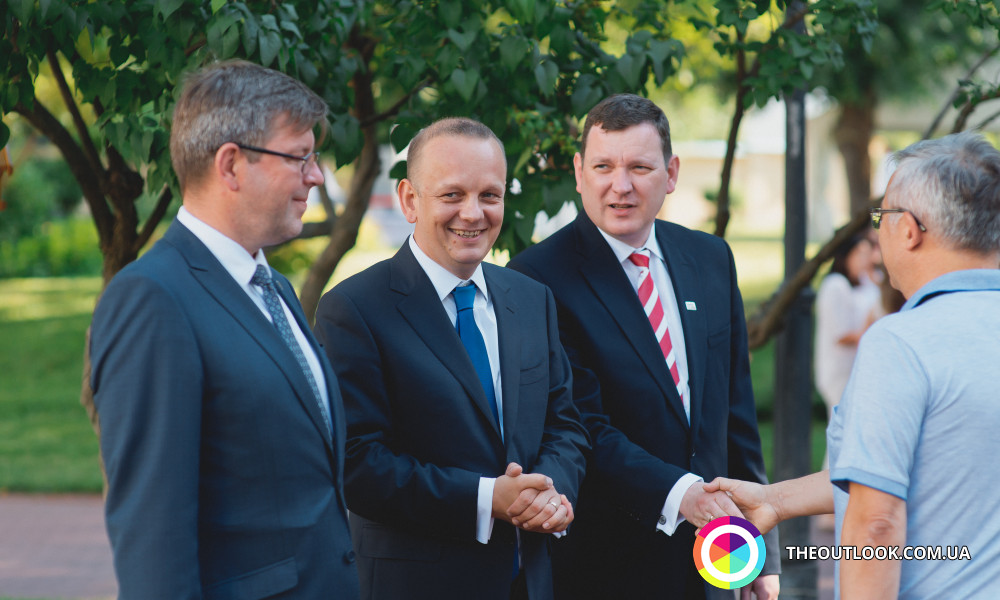 This year, the Baltic countries - Lithuania, Estonia and Latvia - mark the centenary of the proclamation of independence. Then the Ukrainian People's Republic was one of the first to recognize the right of the Baltic peoples to self-determination. In Riga and Tallinn, even for some time, diplomatic missions of the Ukrainian People’s Republic acted. In their turn, after the collapse of the USSR, Lithuania, Estonia and Latvia were among the first to recognize Ukraine's independence and established diplomatic relations with it.

As part of celebrating the 100th anniversary of the independence of the Baltic countries, many cultural and artistic events are taking place in many countries of Europe. The embassies of Lithuania, Estonia and Latvia in Ukraine and personally the Ambassadors Extraordinary and Plenipotentiary organized an official diplomatic reception and together with the Institute of Cultural Diplomacy and the National Preserve "Sophia of Kiev" prepared an exhibition of "Baltic" works by the famous Ukrainian artist Yuri Khimich.

The festive event was attended by the Ministers of Foreign Affairs of Ukraine and Lithuania, Ambassadors Extraordinary and Plenipotentiary of foreign countries accredited in Ukraine, representatives of authorities, politicians, businessmen, the public communities, and the mass media.

The Latvian Ambassador to Ukraine Juris Poikans opened the evening, he congratulated everyone who shared the 100th anniversary of independence of the Baltic states with the hosts of the holiday and noted that this hundred-year period was complicated and stormy. "We even thought at one point that we cannot return to the political map of Europe and the world. And mobilizing all the forces of our peoples, we regained freedom and independence. As well, I am sure that Ukraine will also be able to adequately address all of today's challenges. We are with you and we believe in you. The Baltic States are now ready to build a future with our partners from the EU and Ukraine. Long live our friendship! ", the Chairman of the Diplomatic Mission noted.

In his turn, Estonian Ambassador Gert Antsu made an emphasis on the fact that the centennial of independence is a very important event for Estonians. "We are grateful that you came to celebrate this happy date together. Could you agree that such things happen once in 100 years? We can be proud that relations between states in their heyday and have never been as close as they are now. I wish everyone a good mood and I want this event to be the best this year in Ukraine after the Champions League Final, of course"б the ambassador said smiling.

"100 years ago we laid the foundation of our statehood, and Ukraine did the same. I am confident that our joint history will be the guarantor of our friendship and bright future", said Lithuanian Ambassador to Ukraine Marius Yanukonis.

The head of the mission gave the floor to Lithuanian Minister of Foreign Affairs Linas Linkevicius, who noted that today we are facing an important question where, why and how we are going, what we are fighting for. "We can see how much in common was in our roads. Then and now. I personally can say that when the hymn of Ukraine sounds, then I feel a great intimacy, it reminds me of the Maidan, the struggle for freedom. I'm also proud of you. May God be with you and your state. Together to victory".

The Minister of Foreign Affairs of Ukraine, Pavel Klimkin, stressed the pleasure of a wonderful summer evening, where friends congratulate each other and when five national anthems are played in the performance of virtuoso jazzmen. "Jazz is always the music of freedom. In jazz, everyone plays his own melody and all together play one. There are notes of freedom and friendship. You see four countries today that paid a high price for their place in Europe. Each of us has its own story, but there are many parallels between us", the minister said finally.

Indeed, as Mr. Klimkin noted, the guests could enjoy a relaxed atmosphere in the summer evening for wonderful jazz music, chat with friends and like-minded people and get acquainted with the exhibition of works by Yuri Khimich created during his stay in Vilnius, Tallinn and Riga in the 1960s and in early 1970's. The artist's works testify to the artist's capture of the architecture of the Baltic capitals and is a manifestation of sincere sympathy and respect for Lithuanians, Estonians and Latvians, as well as their cultural identity.