One more "Diplomatic Greetings" project. The Ambassador of Afghanistan to Ukraine welcomes! 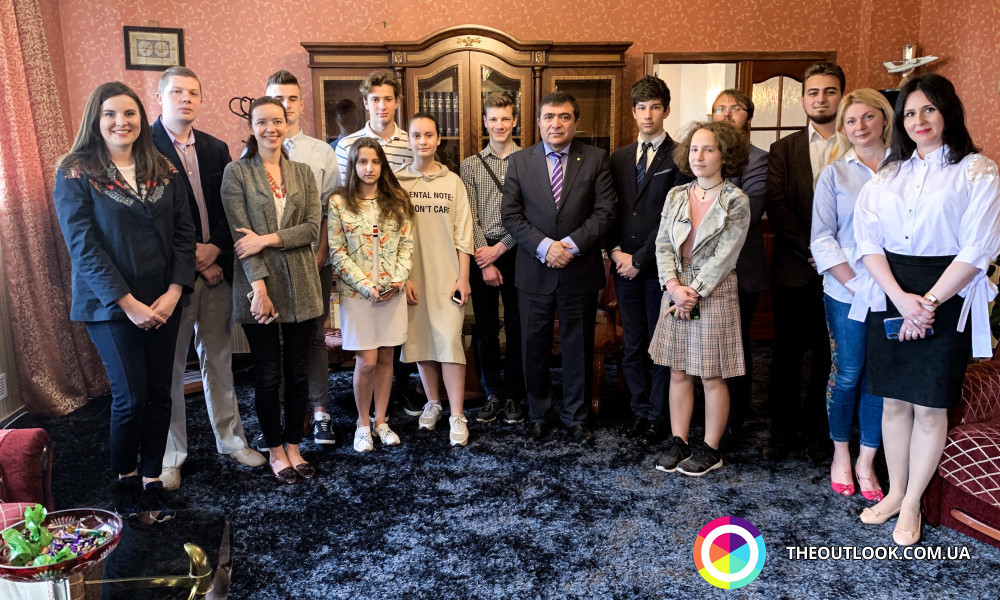 Students of the "School of Young Ukrainian Diplomat" at the Institute of International Relations of the Kyiv National University Taras Shevchenko and the National University of Ostroh Academy maid a visit to the Embassy of the Islamic Republic of Afghanistan to Ukraine. The event took place within the framework of the OUTLOOK and GDIP project "Diplomatic Greetings".

Today, the doors of a diplomatic institution were gladly opened for those who are interested in developing in the future in the profession of a diplomat, by the Extraordinary and Plenipotentiary Ambassador of the Islamic Republic of Afghanistan to Ukraine Sardar Mohammad Rahman Ogly. The Ambassador arrived to head the embassy in Ukraine in 2017. Prior to that, he held senior positions in state structures of Afghanistan. He speaks 5 languages and received higher education in Ukraine, therefore, he considers Ukraine as his second homeland and with special warmth speaks about our people, about the hospitality and generosity of the soul of the Ukrainian people.

A conversation with students was about how to become a successful diplomat; what qualities you need to constantly improve in yourself; how to work as a diplomat when people’s information about your country is mostly related to war; how to break stereotypes; what hopes foreign diplomats make on the new President of Ukraine and the head of the relevant Ministry.

Mr. Rahman Ogly also paid enough attention to the discussion of bilateral relations between our countries and noted that for the first time in 26 years of diplomatic relations between Ukraine and Afghanistan, an official delegation at the ministerial level will arrive in the capital to discuss plans and opportunities for the development of trade between the countries. The Ambassador noted that more than 300 Ukrainian specialists are now working in Afghanistan, they demonstrate a high level of knowledge and professionalism. The Afghan side respects all employees, properly evaluating their work. Therefore, the Ambassador expressed a wish in the development of new areas of cooperation, seeing also the possibility of cooperation in the gas sector. The treasure of Afghanistan calls reserves of precious stones, lithium and oil.

Today, there are about 15,000 Ukrainians of Afghan origin livein Ukraine, they are also working to improve relations between our countries one way or another.

Students asked questions which answers are worthy on the way to become diplomats. At the end of open and informal communication, students were given a tour around the embassy and they were given an opportunity to talk with foreign diplomats and employees of a diplomatic institution.

Reference: In May 2016, OUTLOOK launched the "Diplomatic Greetings" project. It was planned to acquaintain students - future culturologists, diplomats, philologists - with the specifications of cultures and traditions of different countries of the world with the support of foreign diplomatic missions. The heightened interest of Ukrainians in our activities and events led OUTLOOK to the idea of making the project accessible to a wider audience. Starting from December 2017, having enlisted the support of our permanent partner - the Directorate-General for Rendering Services to Diplomatic Missions (GDIP), we continue to work together on an ongoing basis within the framework of this project.

The goal of the project is to acquaint students and young people, culturologists, diplomats, philologists to be with the basics and peculiarities of the diplomatic service from the inside, exchange knowledge between experienced diplomats and young specialists, and research by the Ukrainians the characteristics of cultures at thematic events.

The events of the "Diplomatic Greetings" project are different in their formats each time. These include open lectures by foreign ambassadors, tastings of traditional cuisines, master classes, excursions to embassies, visits of diplomatic receptions, cultural events organized by diplomatic missions (concerts, film screenings, exhibitions, national holidays, meetings with prominent personalities of other countries, informal meetings with foreign diplomatic corps).

We would like to remind that the Ambassadors of Georgia, Finland, Turkmenistan, Japan, Indonesia, Norway, Uzbekistan, the Embassy of Pakistan in Ukraine have already participated in our project.