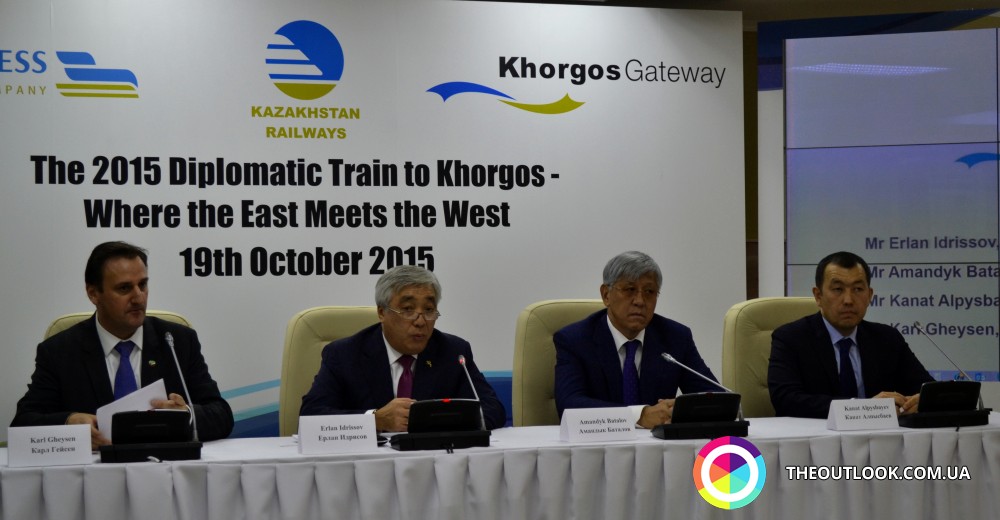 Under the auspices of the Embassy of Kazakhstan in Ukraine was organized visit of Ukrainian journalists to one of the largest cities of Kazakhstan - Almaty. The main purpose of the tour undertaken by representatives of mass media and diplomatic corps, was a visit to the Khorgos International Centre of Boundary Cooperation JSC located within the Almaty area.

The Republic of Kazakhstan is located in the centre of the transit land routes from Europe and the Middle East to China and the Far East. Nowadays, this country that borders with China and Russia, can act as an excellent transportation corridor for freight traffic between both these territories, as well as for Turkey, Iran and other countries in Western Europe, Central Asia, the Caucasus and the Middle East. In this context, cross-border cooperation plays a particularly important role for Kazakhstan in the development of international relations. In order to contribute to the development of such cooperation there was established Khorgos International Centre, which can be considered as a unique organization and a truly breakthrough project. The Khorgos International Centre of Boundary Cooperation is a huge logistics hub, created on the initiative of the Government of the Republic of Kazakhstan and Government of the People's Republic of China. These are two adjacent land plots with a total area of 560 hectares (from which 217 hectares are located in the territory of Kazakhstan). This part of the Khorgos Centre in the future will be enhanced with a modern urban infrastructure in the territory of both countries connected by a special vehicle-pedestrian walkway.

Resources, industrial and transport potential provide many opportunities for investment, while the favourable investment environment in Kazakhstan promises a high return on capital.

During the press tour, the facilities of the FEZ Khorgos - Eastern Gate and the Khorgos International Centre of Boundary Cooperation were attended by the Minister of Foreign Affairs of Kazakhstan Mr. Erlan Idrissov, 50 foreign ambassadors and consuls general, journalists from several dozen countries, Kazakhstan mass media representatives. As a part of the visit, guests were presented the main objects of a modern transport and logistics hub. All the participants were able to see a huge scale, and the future prospects of the expansion of this critical infrastructure of trans-border trade and transport.

Mr. Idrissov highlighted that with the beginning of its operation Khorgos there were created new opportunities for further expansion of trade and investment cooperation, as well as, importantly, significant acceleration of transport in the vast area between China, Europe, CIS countries and the Middle East.

The Foreign Minister also drew attention of the diplomatic corps and the mass media representatives to the fact that some of the international experts now speak about the revival of a new Great Game in the region, especially in the context of the implementation of new projects of the Silk Road:

"These comparisons are outdated and have nothing in common with the modern Kazakhstan and our vision of the situation. Kazakhstan has been advocating for abandoning the philosophy of the Great Game and embracing the philosophy of the Great Gain for all. We are convinced that the development of trade and transportation links in the region has enough room to satisfy the interests and benefit all – China, the West, and, obviously, Kazakhstan."- said Mr. Idrissov.

In his turn, Kanat Alpysbayev, Vice-President of Kazakhstan Temir Zholy (Kazakhstan Railways, KTZ), said that over the last 5 years the volume of transit along the route China - Europe has grown by 17 times. Established to build transit and transport potential of land corridors of Kazakhstan and China, railway and logistics infrastructure at the border allows carrying goods amounting to more than 40 million tons. In the territory of the hub, Director General of the FEZ Khorgos - Eastern Gate, Karl Gheysen in collaboration with the world's largest logistics operator Dubai Port World made a presentation on Dry Port KTZE-Khorgos Gateway. Gheysen said the loading facilities at the so-called Dry Port KTZE-Khorgos Gateway, the first of its kind in Kazakhstan as well as the largest logistics park in Central Asia, offer an effective and economical option for transporting goods through the New Silk Road. Agreements have already been signed with companies such as Hewlett Packard (HP), Toyota, FESCO, DBSchenker and Bravis to compose container trains that will go through the Altynkol station and be handled by the Khorgos-Eastern Gate SEZ.

The ICBCC project opens up additional opportunities: visa-free stay in the territory of ICBC for up to 30 days; the smooth passage of persons, vehicles and goods between the Kazakh and Chinese parts of the centre; duty-free import of 1,500 euros worth of goods weighing less than 50 kilograms. Creation of ICBC Khorgos and its further development as a basic point of the Eurasian bridge on the Great Silk Road opens up new prospects for the expansion of trade and economic cooperation, the development of international tourism and solution to social and economic issues of the border regions.