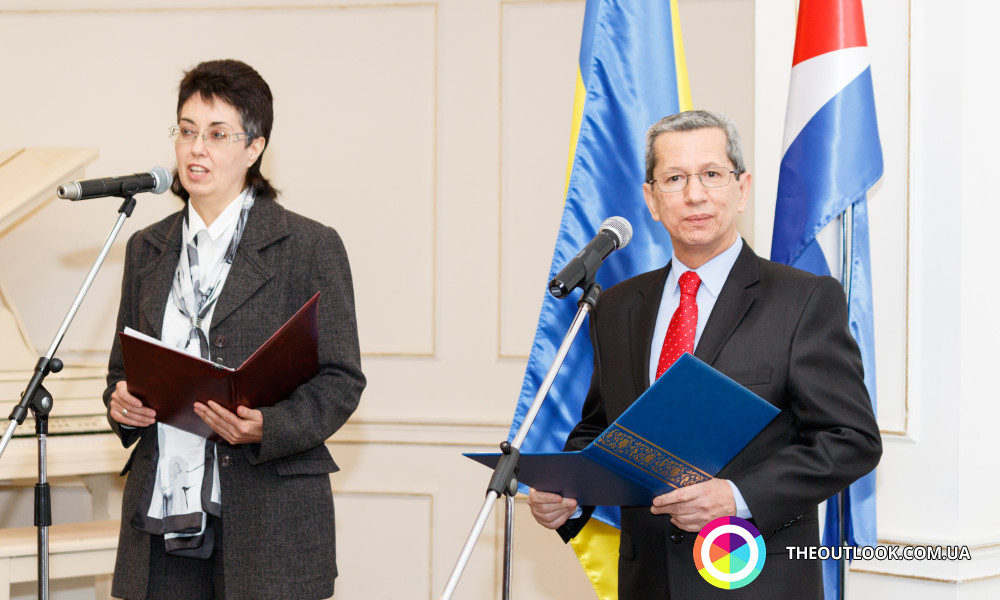 The heads of diplomatic missions of Mexico, Tajikistan, Iran, Belgium, Moldova, Republic of South Africa, Georgia, Palestine, Argentina, Belarus, India, representatives of community, national authorities, and mass media came to express their honor and congratulate with the holiday this day.

In the speech Oscar Santana Leon said words of gratitude to all who was presented for the visit and congratulated the representatives of Cuban side with the holiday. He noticed the fruitful and sturdy relations between Ukraine and Cuba as well as recalled to all who gathered that his country gratuitously helped to Ukraine to save life and health of more than 24 thousand children who suffered from ‘peaceful atom’ in 1986.

Revolution Triumph Day in Cuba known also as the Day of release of Cuba is the great holiday at the island of Freedom marked annually on the 1-st of January. This day Cubans celebrate the anniversary of the victory of revolution in 1959.

Cuban revolution of 1959 led to the fact that in the country the regime of dictator F. Batista was abolished. Beforehand, since 1952 Batista had ruled Cuba, and his authority was remarked with the cruel sanctions.

In 1953 the first attempt to topple the dictatorship regime happened. Then a group of patriots in a number of 160 people ruled by a young advocacy Fidel Castro started assault of military barracks of Moncada. The governmental army succeeded in stopping the assault as many participants were killed while Fidel Castro along with his brother Raul were put behind the bars.

In 1956 the second large attempt to remove a heartless dictator was made. That time, rebels started their way at a small yacht ‘Grandma’ from Mexican port Tuslan towards Cuba while their destination was indicated as desolated farm Cresensio Peresa. From the number of 82 revolutionaries only 22 people were able to get this farm. Officially it was acclaimed that all the rebels had been murdered.

From 1957 to 1959 the rebel movement snowballed and transformed into the common nation patriotic movement. This time, not only separated groups of rebels but also the whole nation started fighting with the abhorrent regime.

The ruling of Batista ended at night from the 31-st of December 1958 to 1-st of January 1959 when the dictator after the ceremony of New Year celebrated escaped from the country. Nowadays in the honor of dictatorship regime abolition the 1-st of January is called as the Day of Triumph of revolution in Cuba.

The modern celebration of this day usually includes parades, concerts, as well as different cultural events.