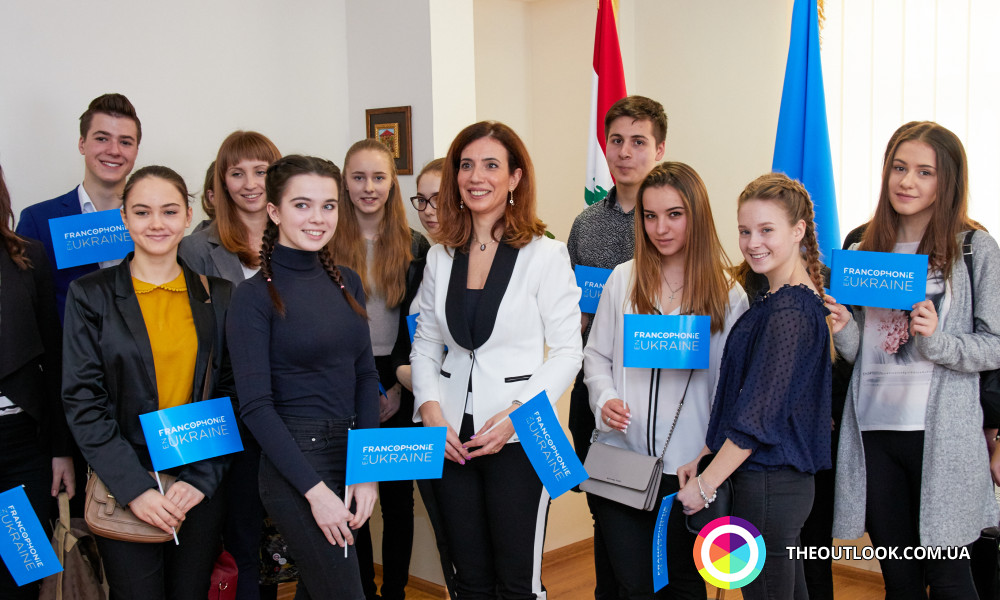 The Embassy of Lebanon to Ukraine and personally Ambassador Extraordinary and Plenipotentiary Mrs Clod Halil Al Hajal organized the Doors Open Day for the pupils of eleven forms of Kyiv gymnasium №191 who studied French language. The event was going in the course of the festival ‘Francophonie Days in Ukraine’.

In the frame of meeting the pupils could peep into the usually closed for visitors space of the embassy as well as receive the special and unique experience of communication with French-speaking diplomats.

For its guests the workers of embassy and personally Mrs Ambassador prepared the small excursion along the embassy, educational narration about Lebanon, its traditions, history, and culture, demonstrated the fact-finding movie ‘Destination – Lebanon’ of the Ministry of tourism of Lebanon as well as delicious Eastern sweets and beverages.

The pupils in the relaxed atmosphere communicated in French with the native speakers, asked interesting questions and observed exciting work of the diplomatic corpus.

We’ll remind that from the 10-th till 30th of March the Embassies of Belgium, Canada, Lebanon, Morocco, France, and Switzerland, Ministry of foreign affairs of Ukraine, French institute in Ukraine as well as network ‘Aliance Francais in Ukraine’ arrange ‘Days of Francophonie in Ukraine’, the festival oriented on the popularization of French speaking culture and French language as the language of communication, democratic values, human rights, and support of cultural variety.

Historically the concept ‘francophonie’ appeared firstly in 1880 when French geographer Onsime Reclus accepted it for the definition of all the people and countries using French. Today the word ‘francophonie’ is written from the small letter when we speak about the French people and from the capital letter when we mean institutional establishments that regulate the relations between French-speaking countries as well as events likewise Francophonie Days in Ukraine.

From the beginning of XX century francophones know about the existence of common language space that encourages exchange and mutual enrichment. This French-speaking environment exists and develops due to the great deal of associations and groups. Among all these organizations there are professional associations including union of writers, editors, scientists, journalists, lawyers, representatives of non-governmental organizations and, of course, French teachers as well as all francophones (who are more than 274 million counted nowadays) as well as adherents of French-speaking culture and art.

Starting from 1970, when the cultural and technical agency on the collaboration was created, what is now called as International organization of francophonie (IOF), francophones are able to rely on institutional mechanism aimed at the spreading of French language, democratic values and deepening of collaboration between 84 countries-members and governments or observers of IOF. Ukraine is the member – observer of International organization of Francophonie.