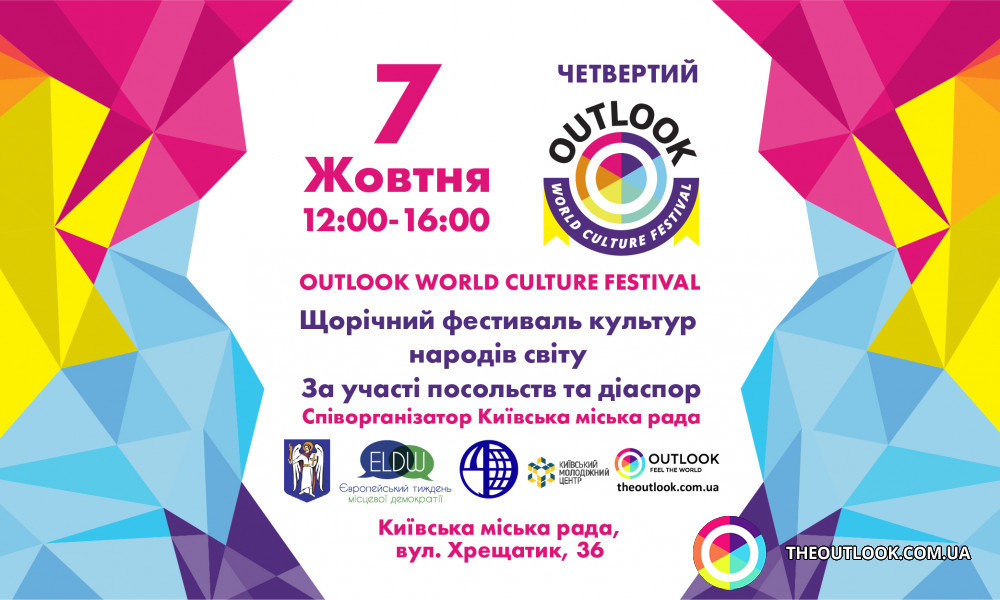 On the 7-th of October from 12.00 till 4 pm in Column hall of Kyiv city council (Khreschatik Street, 36) there will be the fourth festival of international communities’ cultures known as OUTLOOK WORLD CULTURE FESTIVAL. We will represent more than 40 reflections of different cultures to come into stage. We expect more than 30 embassies of foreign states and expat communities will take part. The festival is annually organized by the project OUTLOOK working in the scope of mass media and cultural diplomacy.

All the guests of the holiday will be looking forward to the exciting program where they are about to make a world-round trip touching the authentic furniture, textile, crafts of different countries. As well, they will gain a possibility to socialize with the representatives of other nations and savor bright defile of national suites, exciting dancing and singing performances, as well as tasting of traditional dishes and beverages.

So as to make the event not only entertaining but also educative, the organizers are preparing the range of wonderful workshops among which everybody could find something interesting. Particularly, there will be master classes that allow to understand the culture and traditions of other nations better, for instance, mehendi, Arabian make-up, Japanese and Bengalese calligraphy, sewing, painting of Korean masks and fans, creation of tin whistles from the clay. The guests will learn how to play in Japanese games and create the symbol of Bulgaria, paper roses. The photos taken in the specially created art photo-areas will help to save the recollections about this holiday for many years.

The purpose of the festival is to keep friendly relations between nations, get in touch in the issues of national cultures and encourage making Ukrainians more aware of the specifics of nations’ cultures. The festival takes part under the support of diplomatic missions and embassies of foreign states in Ukraine, national cultural communities, social organizations, expat communities, as well, under the auspices of State enterprise Directorate-General for Rendering Services to Foreign Missions.

This year the event is co-organized by Kyiv city council. It is worth mentioning that the fourth festival OWCF also joins the arrangement of European week of local democracy, all-European event organized by the local and regional authorities of 47 countries-members of European Union and dedicated to the date of European Charter of local Self-Employment assignment in 1985.

In the course of the festival in the center of Column hall there will be symbolical ‘Garden of values’. The visitors of event will be able to choose the values close to them embedded at the colorful leaves of the chestnut – tree-symbol of Kyiv. They will put the values on the branches of ornamental trees. In such a way, till the end of festival the garden will have been fully formed by the guests. The possibility to start the ceremony of garden creation will be given to the Ambassadors and honorable guests of the festival who in the official part will decorate the trees with the tablets depicting the names of their countries to show they share the stated values.

More than 20 Ambassadors Extraordinary and Plenipotentiary confirmed their participation in the ceremony of red line cutting as well as representatives of foreign expat communities residing within the territory of Ukraine.

The entrance is free-of-charge.

The contacts for partners and mass media:

The organizer of the festival: cultural project OUTLOOK Project

OUTLOOK is the international project that works in the scope of mass media and cultural diplomacy. It was created in 2014. The project OUTLOOK provides activity that helps to maintain friendly and business contacts between countries and nations forming new cultural, social, and business scopes. We collaborate with more than 40 foreign embassies accredited in Ukraine being the reliable partner in the area of diplomatic receptions, cultural and social events, and business event organizations. As well, we give the services of PR and media support, photo and video production.

Our team is the organizer of a range of socially important and culturally insightful events in Ukraine. During the years of activity we have implemented a great deal of projects among which we would like to outline the following ones. We’ve organized Days of tolerance (educatory lectures for students, creation of socially motivating video with the participation of ambassadors from 29 countries). Next, we’ve arranged the show of national costumes of world nations OUTLOOK Show. Fashion of the nation under the auspices of 22 embassies. In a period of song contest Eurovision 2017 OUTLOOK accepted invitation of Ministry on Informational Politics of Ukraine to organize the show of ancient and modern Ukrainian costumes Ukrainian embroidery. Step in time intended for foreign journalists. In 2016 along with International Fund of cultural collaboration and with the participation of 30 foreign diplomats we organized literature event ‘We are united by Shevchenko’s words. History of one Zapovit’. As well, we took up the exclusive photo project with the purpose to actualize Kobzar in the world.

The project includes three-language Internet-edition theoutlook.com.ua which reflects cultural and social events as well as diplomatic life in Ukraine. We create only unique textual publications, video records and reportages on the cultural variety, unknown traditions and customs of nations, travel routes, trips, resorts, landmarks, prominent personalities, top managers of the modernity, and business experts, cultural heritage of the humanity, national holidays and festival that happen in different corners of the world, along with the variety of national cuisines, and art.

The head of the project is Darya Karyakina, the social activist, the member of Union of Journalists in Ukraine, the member of Observation Union of the National Social Broadcasting Company of Ukraine.