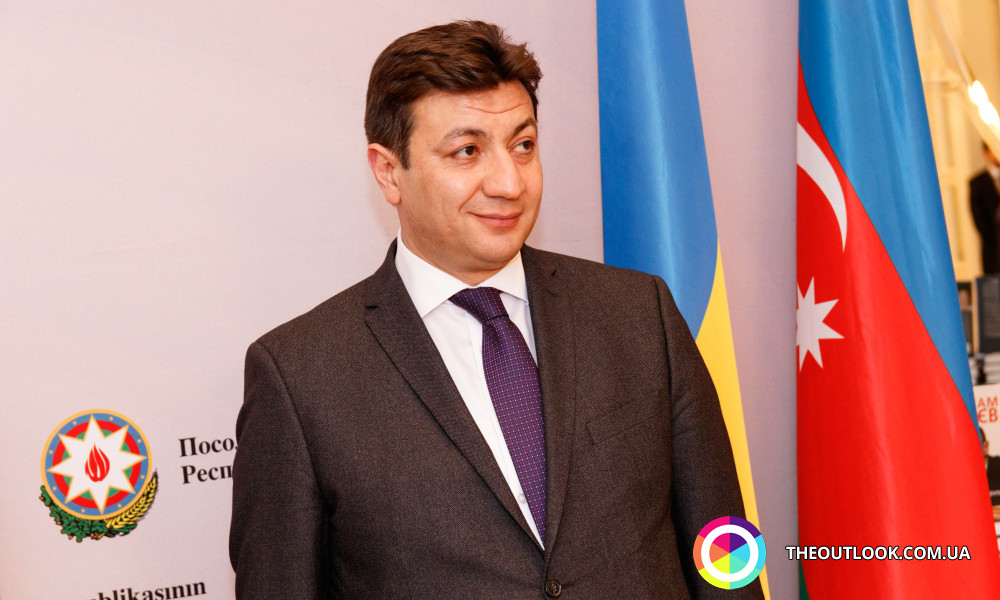 The Ambassador Extraordinary and Plenipotentiary of Azerbaijan to Ukraine Azer Hudiev organized an official reception in honor of Republic day, the national holiday dedicated to the announcement of the Republic’s independence in 1918.

Starting the meeting, Mr Ambassador greeted the guests and gratified everybody for the visit. He noticed that despite the hard past the country is successfully moving in the direction of technological development, today Azerbaijan is one of several universal countries, then it supports the largest energetic projects in the world. ‘Apart from that, today in Azerbaijan the tourism is actively developing as well as the agriculture, manufacture, aircraft, car building’, he added.

Mr Hudiev emphasized that last years Azerbaijan became the center of culturalism in the world. ‘In our country there are numerous humanitarian, cultural, sports events the organization of which establishes a dialogue between different nations. The representatives of all the nations living in our country feel themselves in a very comfortable manner’.

‘This year we also celebrate the 25-th anniversary of establishment of diplomatic relationships between our countries, so the range of cultural events has already happened in Azerbaijan as well as in Ukraine what proves that these relationships are so valuable and important for us. Currently the range of intergovernmental commissions for creation and implementation of important economic projects is created. Azerbaijan and Ukraine support each other in bilateral and multi-sided format. Our positions match, as well, in the questions of territorial integrity which are sensitive for our countries’, the Ambassador said.

As well, in the course of the event the book in Ukrainian language was presented about the President of Azerbaijan Ilham Aliev, the edition was shown to the guests of the evening by Elmira Ahundova, the deputy of Milli Mejlis of Azerbaijan, she remarked that this edition reflects the whole 25-year way of national independence of Azerbaijan, especially these 14 years when Ilham Aliev has governmental power.

On behalf of Ukrainian governmental authorities the Deputy Head of Minister of economic development and trade of Ukraine Michael Titarchuk articulated the greeting speech: ‘Today we celebrate 25 years of diplomatic relations between our countries. How the history has shown, it does not matter how the political events are going, Azerbaijan always stood at the side of Ukraine and contributed into its economics. We are united not only by the common history but also by the majority of the mutual projects’.

On the 28-th of May the citizens of Azerbaijan celebrate the national holiday, Republic Day. He was established in the honor of announcement of the independent Azerbaijan Democratic Republic in 1918. At the end of May 1918 Transcaucasian democratic federative republic that had been existing more than one month disintegrated. Georgia was the first to announce its independence on the 26-th of May while in two days its example was followed by Azerbaijan.

Independence of Azerbaijan Democratic Republic (ADR) was announced by the Temporary National Council of Muslims of Transcaucasia on the 28-th of May 1918. This day in the hall of the Castle of governor at Caucasus in Tbilisi the signing of Independence Declaration happened.

In honor of this day one of the stations of Baku subway was called as well as the street in Baku. It is interesting that in Soviet times the station was called ’28-th of April’ (the date of establishment of Soviet power in Azerbaijan in 1920), however, after the repeated acquisition of independence by Azerbaijan it was renamed into ’28-th of May’. Republic Day in Azerbaijan was established in 1992. This national holiday is the day off. In spite of the fact that ADR existed a bit less than two years, its announcement became the important mark in the history of Azerbaijan.

Azerbaijan in full view
Glass skyscrapers overlooking the steppes, unique resorts, millennial cities - all that is about Azerbaijan, which has become one of the most popular world travelling destinations. OUTLOOK offers to guide you through the most significant tourist sites.